EU Industry Day or the every day routine of privileged access 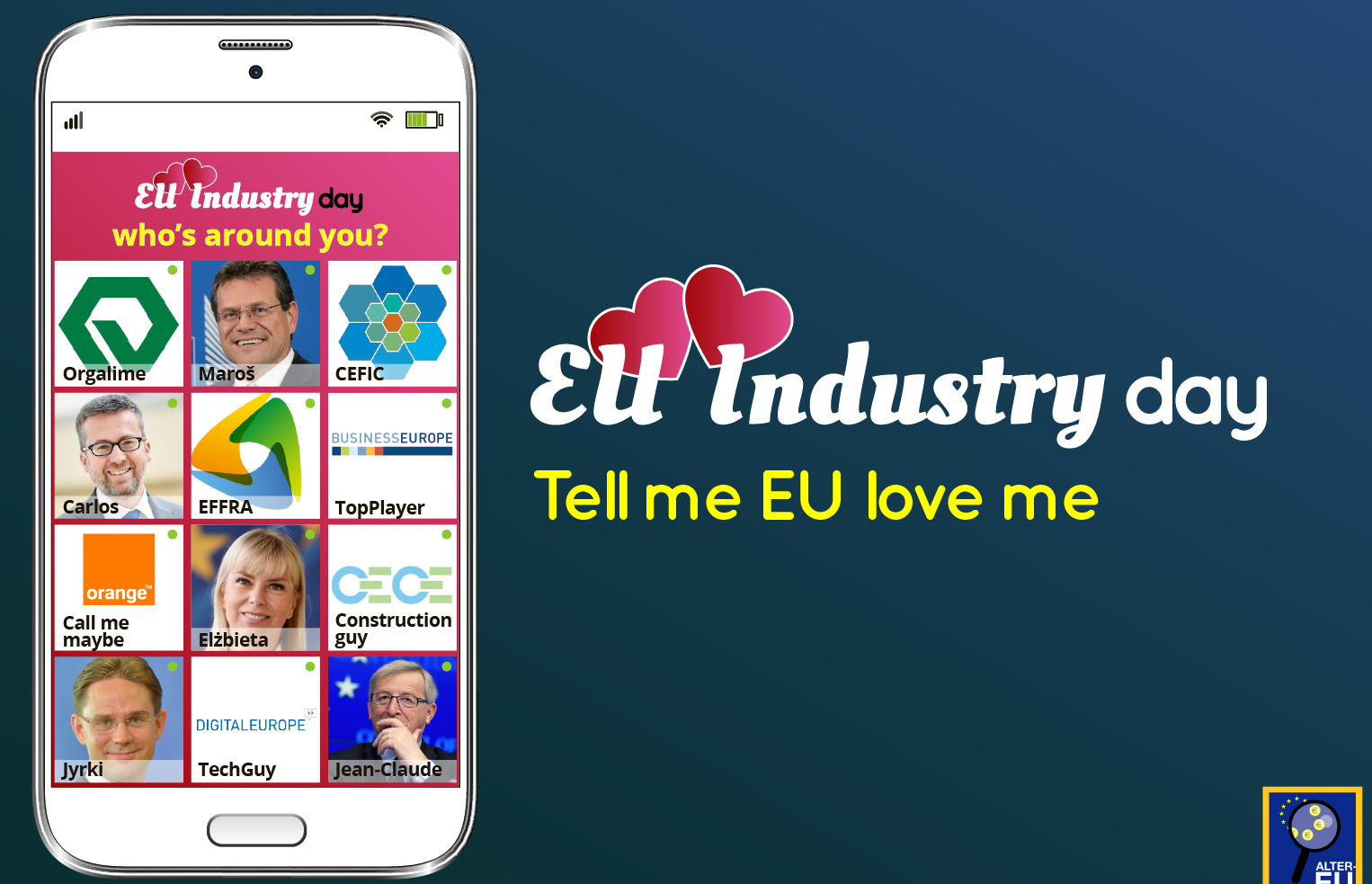 This annual get-together between EU policy-makers and industry representatives was a part of Juncker’s industrial review. The first session took place last year where ALTER-EU reminded everyone that with Juncker’s Commission, every day already is industry day!

ALTER-EU criticised this as yet another event in the EU calendar that puts together Commissioners and big lobby groups. We were dismayed when we heard Commissioner Bieńkowska say those exact words inside the event, but meant as a wish, not as a concern.

This year, not only is the event being repeated, it has doubled in size, now spanning two days with 111 announced speakers and co-organisers1. Of these, at least 31 represent EU Institutions, including president Juncker, Vice-President Jyri Katainen (competitiveness), Commissioner Elżbieta Bienkowska (internal market and industry), Commissioner Carlos Moedas (research), Commissioner Mariya Gabriel (EU digital economy), and Vice-President Maros Sefcovic (energy union). It is also worth noting that Antonio Tajani, President of the European Parliament, is scheduled to give a keynote speech.

Politicians aside, business interests dominate the speaking positions, counting for about half of all voices billed. Of these, almost half are either big trade associations such as BusinessEurope, DigitalEurope and CEFIC, or big multinationals themselves, like ArcelorMittal, Orange, BASF, Finmecanica.

These are organisations that already enjoy high levels of acess to the European Commission.See for instance 2: 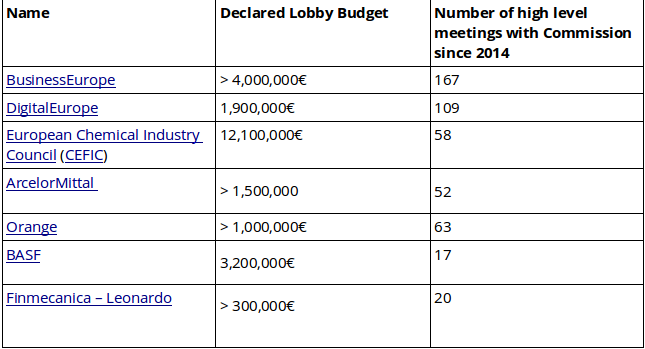 And what about other voices? Well, for trade unions we spotted a mere two spots for speakers, and they were both granted to one trade union, IndustryAll. Otherwise, there is one speaker from SDG Watch Europe (an NGO coalition) and fewer than 15 other types of organisations, such as think tanks, universities or public companies.

So do we need an EU Industry Day?

Corporate interests still dominate the meetings held by Commissioners, their cabinet members, and directors-general with outside groups.

Of the 19 Commissioners who had had more than 50 lobby meetings by 2016, 12 had 60% or more with business interests, according to ALTER-EU’s research.

Some Commissioners show truly spetacular imbalances, including Commissioner Bieńkowska, with 87 per cent of encounters with business interests; Günther Oettinger, Commissioner for Budget and Human Resources, for whom the figure is 83 per cent; and Jryki Katainen, Commissioner for Jobs, Growth, Investment and Competitiveness – 79 per cent.

Besides, the policy calendar is full of events for business only. Just take a look at BusinessEurope, the lobby actor with most high-level meetings. Just four months ago they held their own lobbyfest inside the Commission’s premises. Year after year, BusinessEurope and its fee-paying corporate members have the private ear of numerous Commissioners during that day. This year’s crop were Mariya Gabriel (EU digital economy), Carlos Moedas (research), Vice-President Maroš Šefčovič (energy), Günther Oettinger (EU budget), plus a working dinner with Vice-President Jyrki Katainen (competitiveness). A very similar line-up to today’s event.

Who else will be around?

It is also particularly worrying that the European Commission continues to invite weapons manufacturers to such shindigs. Earlier this year, ALTER-EU member Vredesactie published a report which showed “the arms industry had access to every stage of the decision making process, from setting the agenda to drawing up the modalities of the Preparatory Action” plan which set up a military research programme worth 90 million euros.

But let’s not forget the ever-growing presence of digital lobbies. In attendance will be the head of DigitalEurope, the voice of big digital companies working in the EU. Members include Amazon, Apple, Google, Microsoft, and Oracle. DigitalEurope was one of the main actors lobbying the EU to water down consumer protection standards in the e-privacy directive, a lobby battle so intense that it was described by one Parliamentary insider as “one of the worst lobby campaigns I have ever seen”.

DigitalEurope has also set up it's very own “ digital advisory council” which gives exclusive industry advice to the EU Commission on the digital internal market. This body is made up of CEOs of leading global IT companies, such as Google, Microsoft and Huawei. Their first meeting was attended by not one, but two commissioners. Don't waste your time looking for privacy campaigners or other civil society representatives in that body.

An innovation of this year is the addition of sessions dealing with sustainibility and clean energy. Indeed, Maroš Šefčovič will be present at a number of sessions. Yet, several actors attending, such as CEFIC, BASF, Enel and Iberdrola have been pushing for gas – a climate-wrecking fossil fuel – as a source of clean energy.

Perhaps, even more interesting is the presence of a new industry coalition, Industry4Europe, which will be organising a session. This is a new alliance for whose presence we could only find a hashtag, one joint declaration and a position paper signed by over 100 trade associations, most of which are active EU lobbyists, including ECPA, CEFIC, EuropaBio, FoodDrinkEurope, FuelsEurope, EuroCoal and PlasticsEurope.

The positions of this new coalition are clear: the re-industrialisation package must include a business friendly environment, meaning more and faster trade deals and investing further in the Better Regulation package which critics have pointed out leads only to weakening laws that protect our environmental, social and labour rights. Not satisfied with their already privileged access its members enjoy, Industry4Europe advocates for an increased cooperation between policy-makers and industry itself.

ALTER-EU believes that the voice of big business already is excessively heard in the EU, often at the detriment of EU consumer, labour and environmental standards. EU Industry Day doesn’t stand in isolation but is a part of a series of events and high level lobby meetings.

So, throughout this two ALTER-EU will use the opportunity (and the hashtag #EUIndustryDay) in a tongue-in-cheek manner to expose how such events can confer privileged access to big business.

Join us and demand a EU policy-making that puts the interests of people and planet – not big business – first.

1 Information accurate as of 15/02/2018 and changes to the programme may have occurred since.