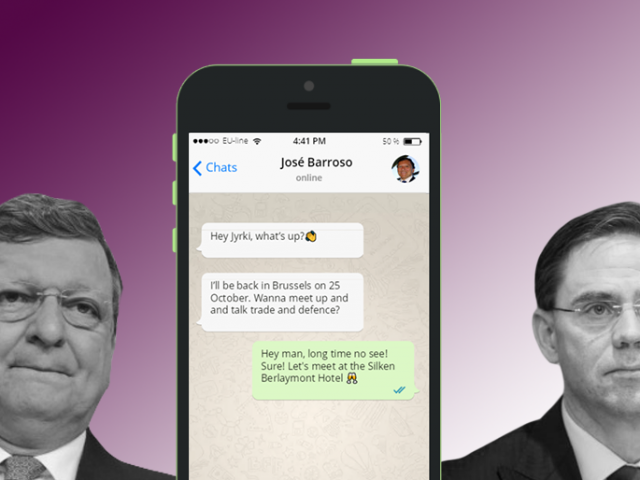 A new letter by Jyrki Katainen, EU Commissioner for Jobs, Growth, Investment and Competitiveness, has now confirmed ex-Commission President Barroso has lobbied for investment bank Goldman Sachs International. In response to an information request, Katainen verified media reports about a lobby meeting with Barroso during which the two discussed “trade and defence”.

After his highly controversial appointment by Goldman Sachs had caused a scandal in summer 2016, ex-EU President Barroso told his successor Jean-Claude Juncker he would not lobby the EU institutions on behalf of his new employer. This promise led the Commission’s ethics committee to opine that Barroso’s revolving-door move would not interfere with his continuing duty to maintain integrity and discretion as set out in the EU treaties.

Katainen’s letter strongly suggests that Barroso broke his word, rendering invalid the basis of the Commission’s opinion on this case. ALTER-EU today filed a complaint to urge the Commission to re-evaluate Barroso’s job at the bank, considering that he has actively lobbyied the European Commission on behalf of Goldman Sachs.

“Commissioner Katainen’s letter strongly suggests that Barroso is indeed using his privileged position to lobby the EU on behalf of Goldman Sachs. No one outside the institution has more insider know-how, contacts and lingering influence than a former president of the Commission, which is a great asset for any actor seeking to influence EU policy.“

“Given the new facts, the Commission’s ethics committee must re-assess its acceptance of Barroso’s role at Goldman Sachs. Former Presidents using their insider status to shape EU policy on behalf of a new employer shows neither integrity nor discretion.”

“This meeting is an excellent example of how the revolving door between politics and business benefits corporations. Barroso was able to set up a one-on-one meeting with a sitting commissioner with a single phone call. They met in a hotel and no minutes were kept of any part of the discussion.

“Only an insider like Barroso can get this type of highly-privileged access, which undermines democracy and feeds distrust in European cooperation. Barroso must face repercussions for breaking the European Treaties and his case be forwarded to the European Court of Justice.”

The confirmation of the lobby meeting between Barroso and Katainen adds further weight to ALTER-EU’s earlier complaint, currently under assessment by the European Ombudsman, which highlighted that the assessment of the former President’s new role was too narrow to fulfil the requirements of Article 245 of the European Treaties. Addressing this problem will undoubtedly require a reform of the powers, membership and tools available to ethics investigations within the Commission.

The Commission’s recent makeover of its Code of Conduct for Commissioners has failed to address these issues.