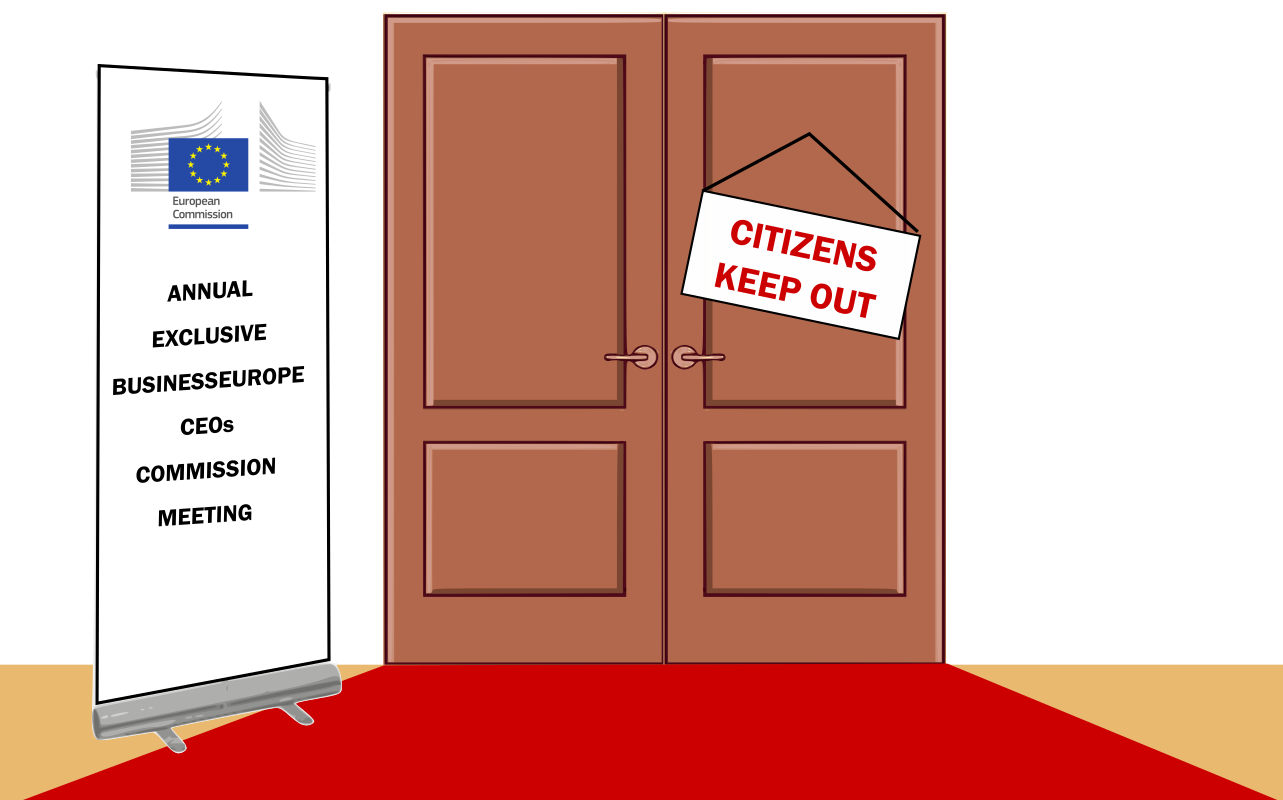 We know that the European Commission is at risk from corporate capture, ie when specific laws or whole areas of policy are dominated by corporate interests. Corporate capture is effectively the takeover of specific areas of the public policy agenda by corporate interests, with the acquiescence of decision-makers. Recent news stories have highlighted how the car lobby continues to water-down emission ambitions, how the arms industry highjacks the EU’s defence policy, and how the gas industry is driving forward energy infrastructure.

And that is what makes today’s BusinessEurope event so startling. Year after year, BusinessEurope and its fee-paying corporate members have the private ear of numerous commissioners during the day. This year’s crop are Mariya Gabriel (responsible for EU digital economy), Carlos Moedas (research), Vice-President Maroš Šefčovič (energy), Günther Oettinger (EU budget), plus a working dinner with Vice-President Jyri Katainen (competitiveness).

This event is just the latest example of privileged access to the Commission by big business interests. Earlier this year, ALTER-EU published research which showed that of the 19 EU commissioners who have had more than 50 lobby meetings since December 2014, 12 have had 60 percent or more of their lobby meetings with business interests ie corporations, trade associations, law firms, and lobby consultancies. So much for President Juncker’s instruction that “Members of the Commission should seek to ensure an appropriate balance and representativeness in the stakeholders they meet”. ALTER-EU has shown that there has been no tangible Commission effort to implement or enforce this rule: a freedom of information request revealed that there has been no implementing measures nor internal communications about it.

Instead the Commission pushes the boat out for BusinessEurope, with this annual event hosted by the Commission in its Berlaymont HQ. The organisation of the event is by BusinessEurope, one of the EU’s highest spending lobby groups, on behalf of its corporate members. These corporations will likely make up the bulk of those attending, and they number some of the biggest – and most controversial – companies active in the EU today.

Who will attend? Will Volkswagen and other car companies attend to try to redeem their battered reputation after Dieselgate and to catch-up with Commissioner Oettinger? Will any of the three tobacco companies listed in BusinessEurope’s corporate membership be present? If they are, this will be a breach of World Health Organisation guidelines which ban all lobby contacts with the tobacco industry except when “strictly necessary” to regulate the industry and its toxic products. Will Bayer be there, as it eagerly awaits the Commission’s decision on its proposed merger with Monsanto? Will Facebook and Google attend to meet with the new digital economy commissioner Gabriel, and perhaps to push back on emerging proposals to tax technology companies on turnover? Will the 'Dirty Energy' companies ExxonMobil, Shell, Statoil, Enel, BP and others show up, keen to promote the dash for gas to the sympathetic Šefčovič?

The truth is, we don’t know which specific corporations will attend, nor what will be discussed. Everything will be held behind closed doors and the Commission has been unforthcoming in responding to access to documents requests aimed at finding out more. But over the discussion sessions, the cocktails, and the working dinner, it seems fair to assume that industry positions will be promoted, lobbying strategies discussed, and corporate activities presented in the best possible light.

At one point, BusinessEurope even argues for “Bodies representing collective interests of wide economic and societal relevance have to be recognised as playing a specific role.” Is that a plea for a special role for BusinessEurope in the Commission’s decision-making, beyond its additional role as a Social Partner?

It’s time for the Commission to stop servicing BusinessEurope and its corporate members via today’s annual big business gala. Corporate capture of EU decision-making is a real threat and this kind of event illustrates the risk only too well. 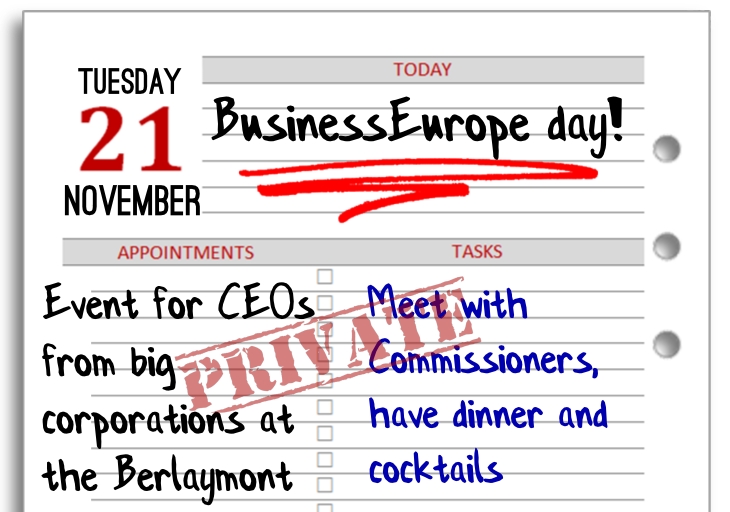