Commission Lobby Transparency: Talking the Talk, but Walking in the Shadows 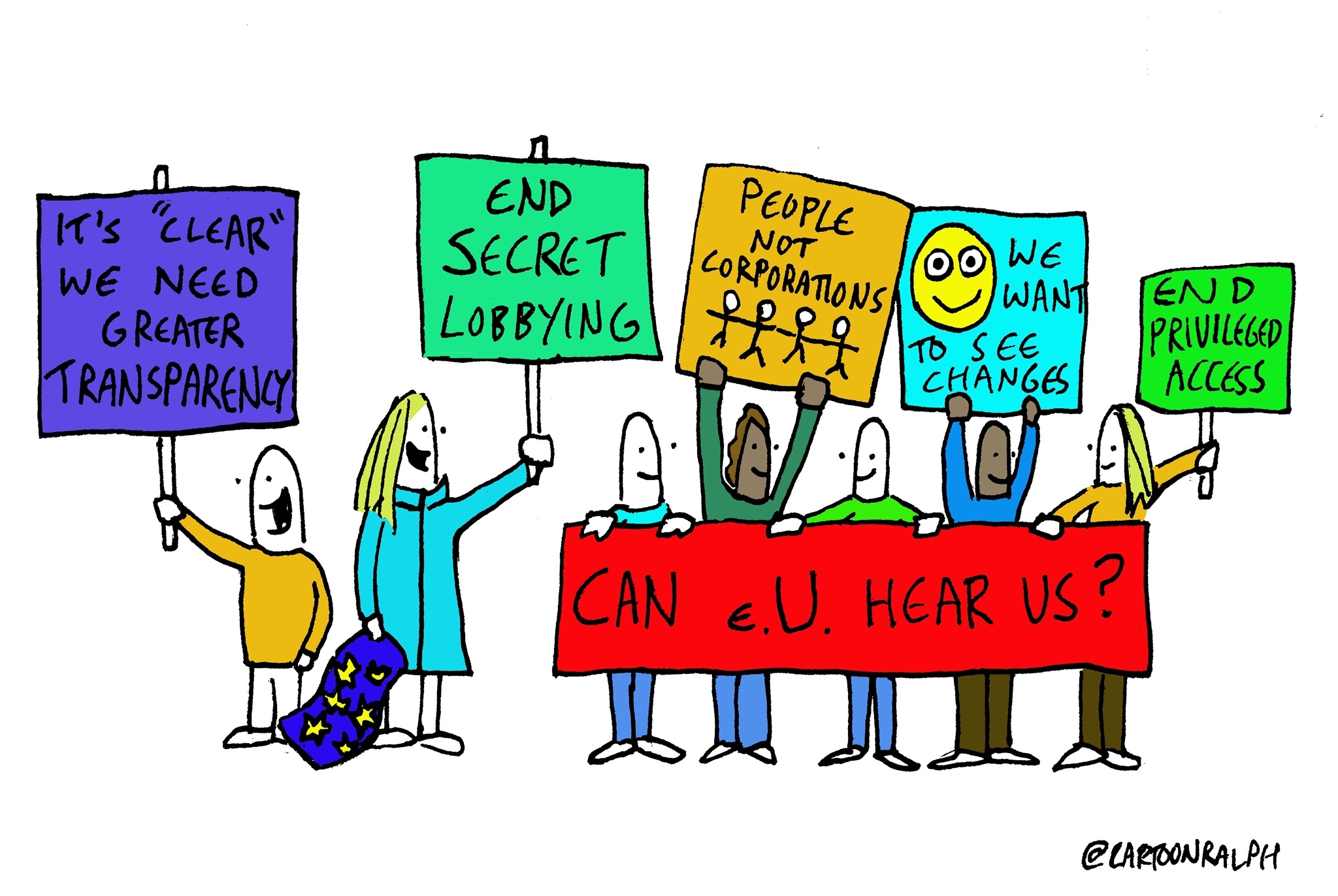 The European Commission’s chief spokesperson says that “President Juncker’s Commission is the protagonist of transparency”, so ALTER-EU has checked the lobby meetings reported this year by the top Commission officials (commissioners and directors-general), and cross-referenced them with other sources, to analyse whether the Commission’s published lists are complete. Our analysis reveals that the Commission has yet to deliver on its promise of proactive transparency.

Nothing to see here

Commissioners and directors-general have been required to publish their lobby meetings since late 2014. However when the Commission also claims that sharing a flight with a German businessman (who is also a lobbyist for Russian interests) in his private plane does not constitute a meeting and therefore does not need to be listed, as in the recent case of Commissioner Oettinger, one must wonder whether its meeting lists show the full story. In light of that, when commissioners and directors-general have not reported any meetings for long periods, the public is forced to trust that this is true.

For example, save for the August holidays, this year internal market and industry Commissioner Bienkowska had roughly six meetings a month with 10 in September but has reported no meetings since then. When we checked with her office about whether the list was up-to-date, as required by the rules, no response was given.

The directors-general are under the same obligation to publish their meetings every two weeks. Yet, Secretary-General Italianer, has yet to publish a meeting which he held two months ago with ALTER-EU, Transparency International and representatives of EU staff to discuss the recent Barroso revolving doors scandal. However, Italianer has listed a meeting with Business Europe in November; although in fact that was a meeting with 26 of its corporate members including IBM, Hyundai and Facebook. He also attended a meeting on 2 December, where he listed the topic as “General EU Affairs”, a description so vague one is left to wonder what it could possibly exclude. Italianer, alongside Directors-General Maarten Verwey (Structural Reform) and Christian Danielsson (Neighbourhood Policy)have no other meetings listed since February. Furthermore, chief Brexit negotiator, Michel Barnier has only reported a single “courtesy call” since taking office on 1 October 2016. His office assures us that no other lobby meetings have occurred. Without a clear confirmation on each page that it is up-to-date, it is impossible for an outsider to know that for sure. These empty lists require the public to trust that no meetings occurred behind closed doors.

Seeing through the Loophole

Fortunately, via its events page, the doors of the British Chamber of Commerce in Brussels (Britcham) are only partially closed. The Chamber, registered as a lobby interest in the transparency register, has hosted many small events with Directors-General Stephen Quest (event), Xavier Prats-Monne (event) and Roberto Viola (event) this year, but none of them reported these meetings. Meanwhile other directors-general such as Dominique Ristori did, which raises a question as to why the others chose not to do so. Britcham holds several meetings a week in its small events room, under Chatham House rules, meaning that no one may report what is said by any particular attendee. Afterwards the speaker, regularly a high-level Commission official, often speaks privately with individual participants. Worse still, those present have no obligation to be on the transparency registerpresenting a clear loophole. Britcham’s transparency register entry simply includes a link to its members list. There are hundreds of members with no indication as to which of them are not registered. There is no way of knowing who has actually attended these meetings. This non-transparent access to key decision-makers is available to those who pay Britcham membership fees or the higher price for non-members. Consequently the level of corporate lobbying going on at these kinds of meetings is far more than the Commission’s declared list of meetings implies.

A further example is Amisa2, the subject of an ALTER-EU complaintto Vice-President Timmermanswhich has gone unanswered for nearly six 6 months. Amisa2 is an organisation shrouded in secrecy (it does not even have a website) that sets up regular policy breakfasts with top EU officials for its members which include ExxonMobil, Total, Dow and Google and manages to obtain regular meetings with top officials.  Commissioner Jourova’s head of cabinet Renate Nikolay, and directors-general Buti, Delbeke, and Ruete all had meetings with Amisa2 since 2014 but none of them reported doing so.

The obligation to report meetings is restricted to bilateral meetings. So we fully expect that the Commission will defend its failure to report meetings with Amisa2, the British Chamber of Commerce or the members of Business Europe by citing this limitation.

Business Europe, Britcham and AMISA2 are each registered as single entries in the transparency register. Thus businesses are able to hide behind the veil of business associations, while the Commission boasts of an occasionally transparent view of the veil. Surely it constitutes eating one’s cake and having it, to call meetings with associations multilateral while transparency register sees them as single entities.

A Maze of Transparency

The question of what is an interaction and whether it needs to be disclosed is one which the Commission has failed to answer satisfactorily. In the recent Oettinger scandal, the Commission claimed that his plane ride with a lobbyist friend did not need to be disclosed as it was not classified as a lobby meeting and did not cover his policy portfolio. However the Commission’s Decision on meeting publication makes no mention of such a limitation. It also ignores the fact that the College takes collective decisions on Commission matters and so individual commissioners are likely to have insights and interests in a far wider range of topics than their specific portfolio.

To be clear, in criticising the gaps in the meetings lists, ALTER-EU is in no way criticising the Commission officials that choose not to meet many lobbyists. ALTER-EU seeks a strong Commission action to stop the privileged access to EU decision-making by business interests. Recent research by Corporate Europe Observatory shows that 77 per cent and 80 per cent of the meetings held by Cañete and Energy Commissioner Šefčovič respectively were with business. Integrity Watch figures currently show that over 71 per cent of all meetings reported by the Commission were with corporate entities. With commissioners Cañete, and Oettinger reporting 72 and 189 lobby meetings respectively this year, there is a clear need to ensure that stakeholder input is not limited to those with large lobby budgets. Furthermore, given that some officials have not been publishing all of their meetings, one must question whether the meetings they have serve the interest of the general public. Transparency would be an essential first step in addressing this, so that we can at least see, who is meeting whom. For that it is vital that all lobby meetings are published in full and promptly.

In the process of conducting this research it was clear that in addition to lacking transparency in the data itself, the path to accessing the data was also rather foggy. Instead of a single meetings database, one must find the links within the website of each directorate-general and the Commission has not made data within the meetings pages searchable, as organisations such as Integrity Watch have done.  At the very least, the Commission needs to provide a clear confirmation that on each page it is up-to-date, even if the last meeting happened some time ago. For example, Commissioners Avramopoulos and President Juncker have not published meetings in over a month, and Commissioner Hahn has not published meeting since March 2015. We called the offices of the Commissioners, but were told by Hahn and Juncker’s teams that the lists were up-to-date with respect to meetings older than two weeks.

Among the Commission’s top figures there is clearly some non-reporting of meetings, including where the meetings were only available to those with significant financial resources. Crucially, to rebuff criticism of the lobby interactions of a senior commissioner, the Commission has sought to limit the scope of its 2014 obligations, suggesting that they do not apply to non-portfolio matters or when the meeting location is mobile. Is this the “protagonist of transparency”? If one purpose of transparency is to restore trust, this protagonist is failing to win over the audience.

All published lists of meetings were last checked on 16 December 2016.