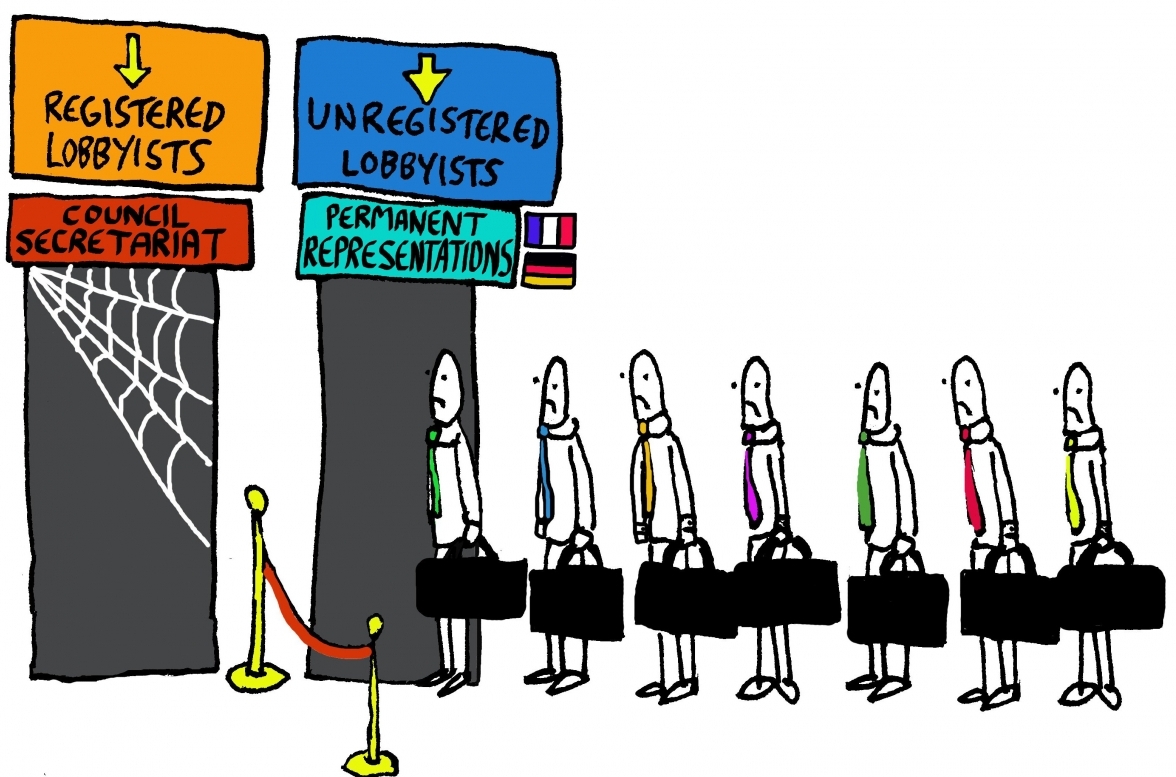 More than one year after the European Commission presented its proposal to revamp the EU Lobby Register, the Council has finally agreed to join the negotiations on its reform and has recently presented its negotiating mandate. Before taking office, Juncker had promised to create a mandatory lobby register. Yet, the Council has always refused to participate in the voluntary Register of Commission and Parliament. A participation of the Council as law-making institution in the new register would clearly make sense. But does the Council negotiating mandate signal the "meaningful participation" the Commission and Parliament requested of it? Or does it risk watering down an already weak proposal?

It is important to note that the register proposal the Commission presented in September 2016 is not for the mandatory register civil society and Parliament have long been asking for – that is, a legally binding register obligatory for all lobbyists. Instead, the Commission's approach is that all three institutions should join an inter-institutional agreement on the EU Lobby Register. This agreement is based on offering incentives to lobbyists, such as meetings with decision makers or access to premises, that are conditional upon registration. The objective is to make unregistered lobbying as unattractive as possible. But it is hardly a 'mandatory' register.

Let's try and start with the positive aspects of the Council’s negotiating mandate. First of all, it's good that the Council has finally agreed to join the Register, thereby increasing transparency at the EU level. Concretely, the Council has agreed to make the following activities for lobbyists conditional upon their registration:

Furthermore, all meetings with the Secretary General and Director-Generals of the Council's General Secretariat will require registration. At first sight this appears good, but is the Secretary General really a hot target for lobbyists? We don't think so. The role of the secretariat is mainly a coordinating and organisational one – the real lobbying takes place elsewhere.

In 2015 ALTER-EU showed, for instance, how member states' Permanent Representations to the EU were heavily lobbied by corporate interests. That's why ALTER-EU has been asking for meetings with the staff of the Permanent Representations to be made conditional upon registration, as well as with the Rotating Presidencies. We also ask for the staff of all council committees and President Tusk and his cabinet to be included.

But the Council was reluctant from the beginning to bind anybody to the “no registration, no meeting" rule beyond the Secretary General. Member states, the Council argued in its legal opinion, cannot be bound by an Inter-Institutional Agreement, and as Permanent Representations are bodies of national governments, they cannot join the Transparency Register. On the other hand, their legal opinion also stated that member states could make use of the Register at EU level voluntarily.

All Permanent Representations generally making use of the Transparency Register – thus forcing lobbyists to register – would have been a reasonable step forward. ALTER-EU was happy to hear that the Maltese Presidency proposed to the Council to create the framework and call upon the member states to use it, even if voluntarily.

The discussions inside the Council working group were extremely opaque, but it appears that while some member states support more transparency, many others are not at all keen on making visible to the public which lobbyists their national diplomats talk to.

Accordingly, the outcome after almost one year is unimpressive: the mandate encourages member states to make certain interactions of their Permanent Representative (and their Deputy) with interest representatives conditional upon registration – but only when holding the Presidency of the Council (which for each member state covers 6 months every 14 years). The rule would apply to nobody else apart from the two highest diplomats of the Permanent Representations.

This is not just significantly weaker than what civil society had asked for, but even what was proposed by the Commission.

That's not what we understand by “meaningful participation" demanded of the Council by the Commission and Parliament. If the Council's mandate is accepted, the real lobbying will still be behind closed doors and lobby players will not be forced into any transparency before meeting key players, such as Permanent Representation officials advising their respective governments, or the ambassadors themselves, outside of the presidencies.

At a time when transparency at the Council is increasingly criticised, we had hoped that member states would have got the message and actually decided to change things. But according to this mandate, they haven't.

This week, the European Ombudsman wrote to the President of the European Council Donald Tusk asking him to be transparent about his and his team's lobby meetings, and to only meet registered lobbyists.

Good to see that there are several players asking the Council to be finally transparent about who meets whom to influence legislation. Civil society, Commission, Parliament, and the European Ombudsman should work together to make the Council commit to real lobby transparency.

Watering down the agreement

But not only does the Council refuse to adopt lobby transparency, its mandate could also end up watering down the participation of the other institutions.

The Council mandate deletes every binding commitment of which interactions should be conditional upon registration. The Council argues that as a legal vehicle, the Inter-Institutional Agreement shall not impinge on the competences and internal organisational powers of any of the three institutions. Therefore, each institution should draft its own rules and simply notify the Secretariat of the Register of the type of interaction that it unilaterally decides to make conditional upon registration.

Clearly this is much less binding for the institutions. If one of them decides that certain interactions shouldn't be conditional on prior registration, it can simply change its rules and notify the Secretariat. It also introduces a level of uncertainty and chaos to an already complicated system. Absurdly, the Council even suggests that each institution should have its own code of conduct for interest representatives! In the scenario of the Council's mandate, it will become a full time job to understand which rules apply when and where.

We clearly count on Commission and Parliament now to reject this attempt to water down the whole instrument.

Last Tuesday, representatives from Parliament, Council, and the Commission met and agreed that negotiations on what they call a 'mandatory' EU Transparency Register can start early in 2018. They also stressed the importance of conducting the upcoming inter-institutional talks in an open and inclusive manner. That's good news.

In February 2017 more than one hundred civil society organisations wrote to Parliament to ask for a transparent process, yet the discussions leading to the negotiating mandates for the transparency register took place in almost complete secrecy. We can only hope that the promises about openness and inclusivity made this week will be true for the negotiating phase, with agendas and minutes of meetings published in a timely manner.

We are now a decade into the transparency register discussions, still debating the very basics, and always at risk of losing the few (and voluntary) measures we do have.  The EU institutions risk to be outpaced by better lobby registers in the members states, like in France for example. It is time to stop dragging our feet.