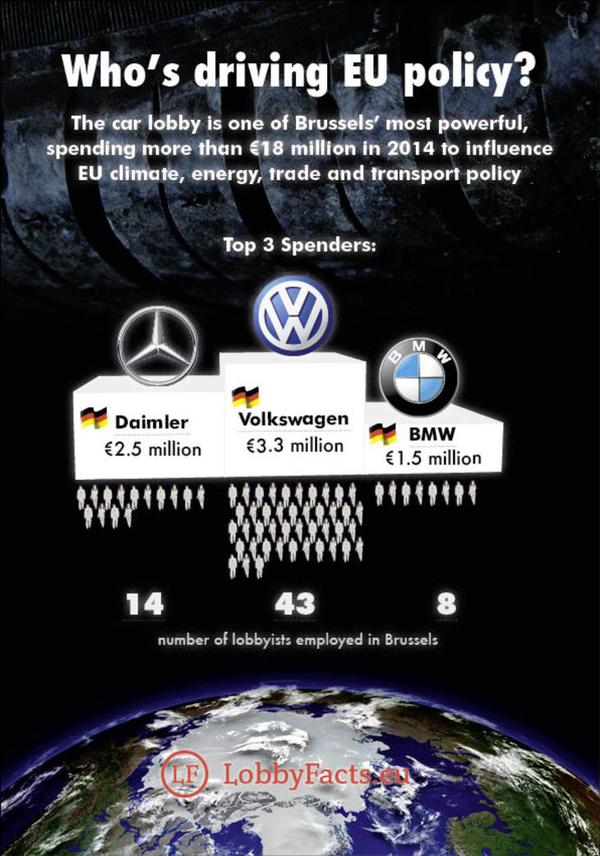 The recent VW scandal makes it very clear that we need a fundamental re-think about the way in which European institutions, especially the Commission, engage with the car industry and corporate lobby interests.

Like many, ALTER-EU was shocked by the recent Dieselgate emissions scandal and the revelation that just one in ten new diesel cars are achieving statutory limits on the road. It seems clear that Volkswagen (and most likely also other car producers) has intentionally misrepresented and manipulated data in order to undercut rules and standards which have been put in place to protect our health and the environment.

The Financial Times reported that in 2013 then environment Commissioner Janez Potocnik informed Antonino Tajani, Commissioner for industry at the time, about emission cheating by car producers, yet Tajani failed to take action. An in-depth investigation is needed to identify who was responsible for the Commission failing to fulfill its responsibilities.

This débâcle makes it very clear that we need a fundamental re-think about the way in which European institutions, especially the Commission, engage with the car industry and corporate lobby interests. As Politico recently wrote, the Volkswagen scandal

"includes the exposure of the EU as both a toothless regulator and a flawed lawmaker ... It casts doubt on the way that EU laws are drawn up. It reminds us that the legislation has already been shaped according to corporate taste, with an abundance of stakeholder consultation and lobbying."

When searching for the failures of the EU's regulatory system, lobbying by Volkswagen and its car industry allies against strict and tightly enforced rules to achieve EU emissions reduction standards quickly reveals itself to be an important way for the industry to influence on rule making and enforcement. Volkswagen is a major EU lobbyist with a spend of 3.3million euros in 2014 and the equivalent of 18 full time lobbyists. The company ranks among the10 biggest companies lobbying the EU. Together with their trade association ACEA (Association des Constructeurs Européens d'Automobiles), Volkswagen and other car producers dominate high-level lobby meetings in the Commission. A recent study by Corporate Europe observatory showed that of 44 car-related meetings, only 4 took place with civil society groups and all others with industry.

Volkswagen is also a member of five Commission expert and advisory groups: the Working Group on Motor Vehicles, the European ITS Advisory Group, the KETs High Level Commission expert group, the Expert group on alternative fuels and the iMobility Forum. These groups play an important role in the regulatory and policy-development process, which provides its members with outsized influence in formulating regulations early on.

ALTER-EU believes that the European Commission needs to introduce tough measures now to prevent car industry capture of EU decision-making. These should include:

We believe that the Commission needs to take urgent action to show that it understands the severity of what has happened. The EU's Code of Conduct for lobbyists says that all registrants should ensure that the information they provide "in the framework of their activities covered by the Register" is "complete, up-to-date and not misleading". Volkswagen, and any other company found to have acted in a similar fashion, should not be allowed to continue lobbying decision-makers as if nothing has happened.

ALTER-EU thinks that Volkswagen (and other car companies that misled decision-makers) should be suspended from the EU lobby transparency register until this review and any other investigation into Dieselgate are complete. This would mean that no further meetings are held between Volkswagen (or anyone representing them) and the Commission unless it is directly concerned with the investigations themselves. We also think that Volkswagen and any other car companies that misled decision-makers should no longer be members of the Commissions expert and advisory bodies.