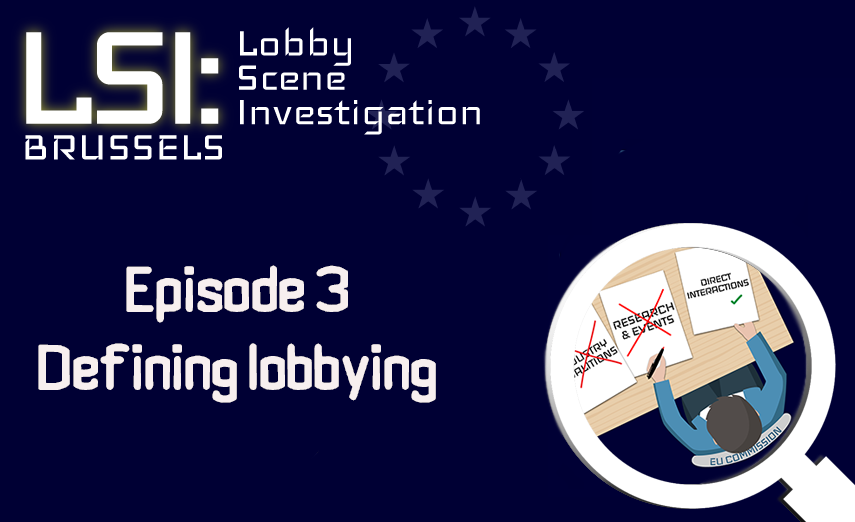 Author:
Vicky Cann, Corporate Europe Observatory
- Previously on LSI: Brussels -
On the pilot of LSI:Brussels detective Douo analysed the case of corporate capture in the EU, namely excessive influence of corporate interests on decision-making which has Dieselgate as one of the most shocking recent examples. On episode 2 detective Pavlou profiled the Council and Permanent Representations, two key institutions that still don't apply any rule on lobbying regulation and transparency.

What do you think lobbying is? Meeting with or writing letters to decision-makers? Employing a lobby firm to represent companies in meetings with decision-makers, or to help organisations design influencing strategies? Commissioning research and holding events designed to influence policy, or joining forces with like-minded organisations to create platforms of common interests?

All of this is lobbying according to any common-sense understanding, and all of these activities are covered by the definition of lobbying used in the current EU lobby register. It focusses on “directly or indirectly influencing” decision-makers, and this definition is one of the best attributes of an otherwise flawed register. But the Commission’s proposal for a new register suggests a redefinition that would only cover direct interactions with the institutions.

This sets off major alarm bells for ALTER-EU, the Alliance for Lobbying Transparency and Ethics Regulation. The exclusion of indirect lobbying would imply that this type of influencing is neither significant, nor important – a suggestion that could not be further from the truth.

It is likely that many organisations try to influence the EU institutions but do not have the capacity or wherewithal to do so directly. According to data-ranking tool LobbyFacts, 72 per cent of the current entrants in the EU lobby register have had no high-level lobby meetings with the elite of the Commission (since records were first published in December 2014), 79 per cent do not have a European Parliament pass, and 69 per cent do not have an office in Brussels.

Of course, these statistics do not mean that these lobbyists have not had any direct interactions with the Commission or Parliament (for example, they may lobby junior Commission officials or MEPs instead), but it does suggest that some registrants are not active ‘interactors’ or direct lobbyists.

As a consequence, a narrowing of the current definition of lobbying risks to exclude a large proportion of these organisations. Under the new definition, if they are only lobbying indirectly, they would no longer be required to join the register.

Letting lobby firms off the hook

While some lobby intermediaries like law firms and lobby consultancies may conduct direct lobbying on behalf of clients, they also earn substantial fees from providing advice on who clients should meet, outlining the best arguments and tactics to sway policy-makers, and drafting position papers on their behalf. A definition which ignores this form of lobby strategising would be setting out to ignore what is likely to be the biggest part of the work done by lobby firms.

The Commission’s lobby meetings data indicates that big business relies on lobby consultancies for precisely this kind of indirect lobbying. Since December 2014, the biggest 20 lobby firms, which have hundreds of mostly corporate clients between them, have had just 279 meetings with top-level Commission staff, while the biggest 20 companies have racked-up more than 3 times as many meetings with the Commission elite during the same period. Clearly preferring to take care of their direct lobbying needs in-house by interacting with decision-makers themselves, it seems that it is lobbying advice, strategy design, and the running of wider campaigns which big corporations mostly turn to lobby consultancies for.

If the new register were to exclude indirect lobbying from its definition, could we see lobby firms and other intermediaries avoiding direct lobby interactions with decision-makers so as to dodge the requirement to sign-up and provide transparency on the bulk of their lobby work?

In response to ALTER-EU’s concerns, the Commission has argued that because the register is moving to a “mandatory” system which requires registration to secure meetings with “decision-makers”, the definition of lobbying needs to become more precise. Yet, the new register will not become truly mandatory ie. legally-binding, and registrants will not be legally-bound by the information they submit. In that case, we do not see a rationale to exclude indirect lobbying from its scope.

The Commission also argues that while its interaction-based definition of lobbying will be at the centre of the register, it does intend for indirect lobbying activities to be included in the lobby spending declared by registered organisations. But surely it will be confusing to have two different definitions of lobbying in use? Additionally, it is problematic that the wider definition of lobbying to be applied to lobby spending declarations would not feature in the formal agreement between the EU institutions, but would instead be relegated to a technical document. These ‘implementing guidelines’ would be drafted at a later stage, beyond public scrutiny. Under these circumstances, the risk that indirect lobbying will entirely fall off the agenda of the register seems real.

Parliament must fight back

The European Parliament agrees with our concern that the register needs a comprehensive definition of lobbying. Its mandate to enter the lobby register negotiations, calls for “precise and reliable definitions” and the inclusion of both “direct and indirect interest representation”.

For ALTER-EU, the Commission’s proposed change to the definition of lobbying is unnecessary and risky, and we hope that MEPs will instead insist on the retention of the original definition in the new register, and for it to apply to registering, declaring activities, and declaring lobby spending. To reinforce this, all Commission officials and all MEPs should no longer meet unregistered lobbyists.

This blog first appeared on EurActiv on 6 November 2017.
This is the third in ALTER-EU's blog series Lobby Scene Investigation Brussels.