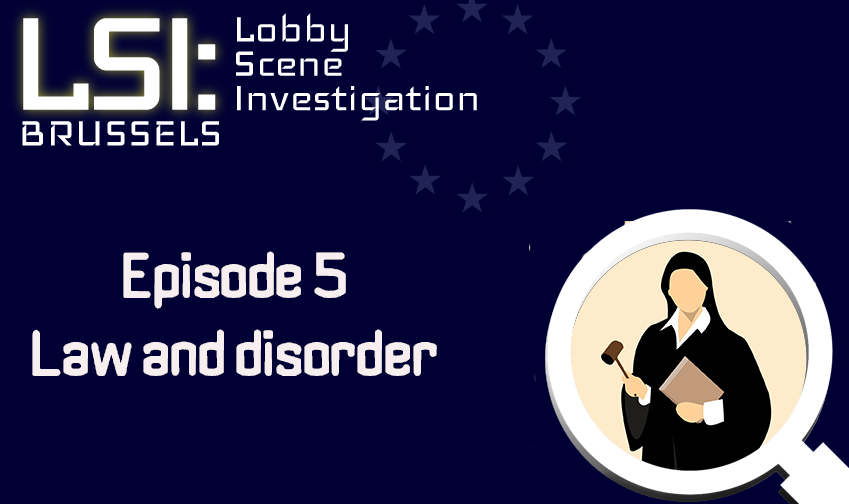 Author:
Nina Katzemich, LobbyControl
- Previously on LSI: Brussels -
In the mid-season finale of our series we dove into the deep end of lobbying at the EU level: through the DG FISMA case we explored the shortcomings of the Commission transparency rules which do not cover the greatest share of meetings that lobbyists have with civil servants ranking below the level of director-general.
In this episode we'll see how law firms acting as lobbyists create another layer of opaque lobbying.

A scandal broke with news that Michel Petite, former head of the Commission’s Legal Service, had been lobbying his previous department on tobacco issues on behalf of law firm Clifford Chance in 2013. Petite was forced to leave the Commission's Ethical Committee, which advises on revolving door moves of ex-Commissioners. The law firm had not signed up to, and remains outside, the EU's lobby register.

While this case is in some ways exceptional, it is only one among many examples of law firms that work as lobbyists but are missing from the Transparency Register. In May 2016 ALTER-EU published a report revealing how nine big international law firms had refused to sign up to the lobby register despite advertising EU lobbying services on their websites, co-organising lobbying events, or hiring former staff from the EU institutions or MEPs who work for them alongside their mandate. They openly behave like lobbyists, yet circumvent the voluntary register. Despite being named and shamed, eighteen months on, seven of those nine law firms remain outside the register (all data correct on Lobbyfacts on 30 January 2018).

Law firms are very popular lobbyists in Brussels. They often specialise in legal topics such as competition or anti-trust. They also understand the technical details of upcoming directives and, on behalf of clients, can discuss these directives with officials, or draft amendments to be passed on to MEPs. Often, this activity happens under the radar.

These law firms cloak their lobbying activities with the argument that they cannot join the register, as that would force them to disclose their clients, which they argue would break lawyer confidentiality privileges. But of course, this confidentiality does not apply to clients who pay for lobbying services.

Many of the law firms mentioned in ALTER-EU’s study are registered as lobbyists in the US and are among the biggest actors there. However, they only joined once the register in the US was made legally binding. In Brussels, the lobby register is voluntary and the conclusion is clear: law firms will not join up until it becomes mandatory.

Law firms will have an easy time boycotting the new register

While it seems clear that the solution to the missing law firms is to make the EU’s lobby register legally-binding, the Commission insists that this is not achievable. Instead it has proposed a revised voluntary register where lobby meetings with decision-makers would be made conditional upon entry in the lobby register. The Commission argues that such incentives will provoke even the most recalcitrant of lobbying law firms to sign up.

In our view, there is no evidence to back up this expectation.

Lobbying law firms will be able to carry on their lobbying activities outside of the register and these incentives will not make a big difference to them. For instance, only 39 law firms of the 142 currently on the register have had meetings with those defined as Commission decision-makers or possess Parliament lobby badges, the two existing conditions in place already today to incentivise registration.

We do not expect these incentives will get much tougher under the new reform. MEPs have opted for a very soft interpretation of the 'no registration, no meeting' rule. At the same time, the Council wants to impose the rule mainly on top officials of the General Secretariat, an institution which is not a known hot target for lobbyists.

If you cannot meet the Commissioner, why not try another official?

The Commission’s own proposed rules rules are full of loopholes, over 30,000 of them in fact! This is because officials below the level of directors-general are not covered by the 'no registration, no meeting' rule. Among these 30,000-plus officials are many who are directly involved in drafting laws, deciding on crucial technical questions, or who attend expert group meetings together with representatives from these law firms.

For example, according to official documents between 2015-2016 law firm White & Case had extensive correspondence with DG Trade for their client Celanese, a chemistry concern from Texas, about trade facilitations. The correspondence shows that besides many emails between DG Trade and White & Case about their client, there was at least one meeting with representatives from DG Trade, White & Case and Celanese. The “no registration, no meeting rule” won't get law firms to register as long as it does not cover all officials.

Finally, many law firms do not even meet with political players. They do a lot of indirect tasks for their clients like drafting amendments or advising how to shape a law to their advantage. If the Commission succeeds in restricting registration to those who have direct interactions with the EU institutions, it will mean that law firms which concentrate on advisory activities will be relieved of the duty to register.

The Commission has to face facts. Under its current plans, the big lobby players among the law firms will go on boycotting the register. Only a legally-binding one will force them to sign up and the Commission needs to prepare this law. In the meantime, only a very strict incentives-based regime will encourage more lobbying law firms to register. This requires a clear ban on meeting with any official, MEP or Council decision-maker, and a definition of lobbying which clearly includes indirect lobbying too.

This blog first appeared on EurActiv on 8 February 2018.
This is the fifth in ALTER-EU's blog series Lobby Scene Investigation Brussels.