LSI - Episode 6 - How to get away with bad data 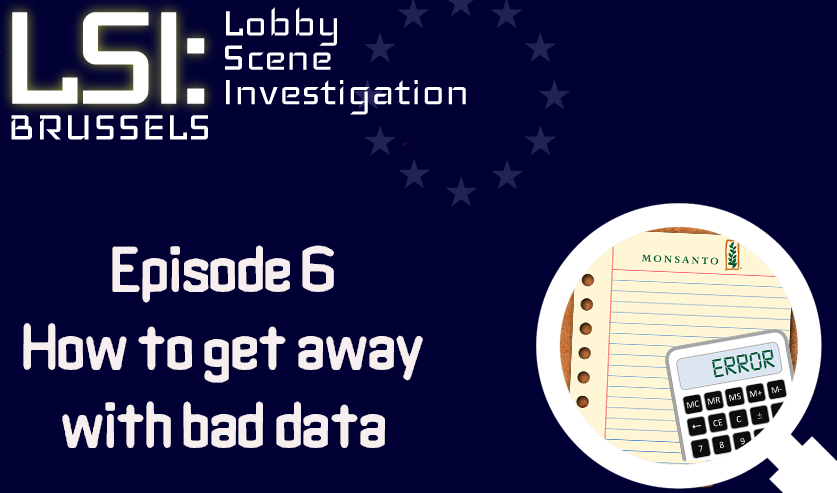 Our agents have already uncovered two main ways shady lobbyists escape the scrutiny of the Transparency Register: they meet civil servants in the Commission lower levels and, if working for law firms, they use the lawyer confidentiality privileges to keep their activities opaque.

But what happens if a company declares a much lower budget than it actually spends on lobbying? It will be punished for mis-leading...right?

Earlier this year, Corporate Europe Observatory caught agri-giant Monsanto under-declaring their lobby spending by at least one million euros. This was one of a series of complaints placed on organisations that either had glaringly incorrect information or were not registered when they ought to be.

These complaints and the way there were handled reveal a series of problems with the EU’s Lobby register, from the lack of resources to lack of power to enforce compliance.

Last week, the Council, Commission and Parliament held the second round of discussions on how to fix the EU’s lobby transparency register but they seem to have reached a stalemate. Negotiators should keep these cases in mind as reminders of why bold changes are needed.

Last year, Monsanto was the protagonist in several policy battles, including the highly controversial re-approval of the pesticide glyphosate and the merger with German agri-giant Bayer. These were heavily disputed issues which put the US giant at the centre of media attention and raised questions over its real influence on EU policy. The name of the company has come to be so toxic that Bayer has decided to scrap it entirely.

Despite all the attention the company received, Monsanto was able to declare a surprisingly low lobby budget of less than €400,000 for three years. A quick check of the lobby register showed Monsanto was employing four lobby consultancies which together declared receiving at least €910,000 from the company.

Yet, it was only after Corporate Europe Observatory placed a complaint that the body responsible for the transparency register, the Secretariat, noticed the glaring gap.

A couple of months later, Monsanto was suspended for ten days for failing to respond. Ultimately, the company updated its entry with a new lobby budget of at least €1,250,000. That is a 200% increase.

What happens when a big company lies over lobbying?

In short, not much. Monsanto increased its lobby budget and the Secretariat declared the case closed. No supporting documents were requested, and no further checks conducted.

This means that there are still problems with Monsanto’s entry: most of its activities in influencing the EU seem to be done by others, from lobby firms to industry coalitions, but Monsanto had not declared all these links in its own entry.

After the Secretariat’s intervention, the firm merely added two new names to their entry. One was the Glyphosate Task Force, listed not by its name but under the acronym GTF, making it indecipherable for most people.

Even worse, the Glyphosate Task Force itself was not registered. This was despite being created exclusively to influence EU policy, being listed as a client of lobby firm Hume Brophy, and even exchanging correspondence with Commissioners and EU officials.

The Secretariat asked the Glyphosate Task Force to register. Months later, it still has not.

Monsanto and the Task Force are not alone. Last November, Corporate Europe Observatory made four other complaints about organisations where there was evidence that they were actively undertaking lobby activities at the EU level but had not signed up to the lobby register. The Secretariat asked them to register, but to date none have.

Lobby registers are essential to guarantee public scrutiny of policy-making. They help journalists, civil society and citizens find out who has lobbied for what, how, when, and with how much money. But effective public scrutiny requires that all relevant players are included and that their information is accurate and up-to-date.

The current register is not well equipped and it reflects on the data. As it is not based on a legal act, the Secretariat lacks the power to properly enforce the rules. On top of that, the EU register is now the biggest in the world with over 11,000 entries, but the Secretariat that monitors it is more under-staffed than ever.

It is important to improve the Secretariat’s resources but, despite public commitments from the three institutions to increase these, we still do not know what that will look like.

More importantly, the monitoring will have to be matched by penalties for lack of compliance. A legally binding register is currently not on the negotiating table. The best we can hope for is that if an organisation breaks EU lobby rules, a comprehensive “no registration, no meeting” rule will keep it from accessing policy-makers in Brussels.

Negotiations have dragged on for over a year. It is time for the Parliament, Council and Commission to be bold and move beyond what was announced so far. If neither institution moves, we will continue to see those that do not wish to be transparent finding ways to evade the rules and those that make misleading entries facing no consequences.

This blog first appeared on EurActiv on 21 June 2018.
This is the sixth in ALTER-EU's blog series Lobby Scene Investigation Brussels.