MEPs urged to do more to tackle excessive lobby influence 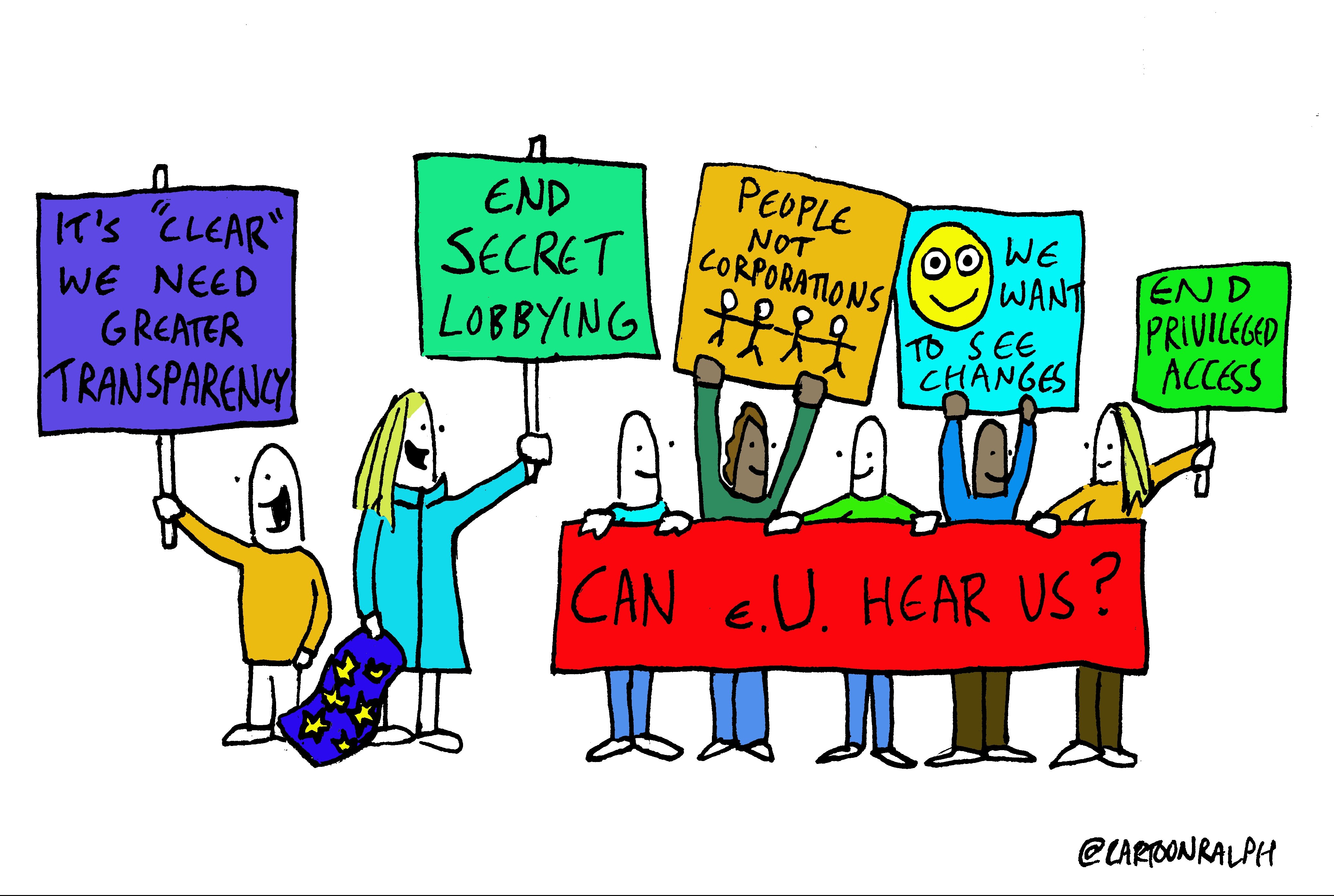 The Politics for People pledge for MEP candidates says, “I will stand-up for citizens and democracy against the excessive lobbying influence of banks and big business.” Coordinated by ALTER-EU, the Alliance for Lobbying Transparency and Ethics Regulation, the group mobilised over 25,000 EU citizens to urge their 2014 MEP candidates to sign the pledge; by election day 1350 had done so, of which 180 went on to be elected to the European Parliament.

Our pledge tapped into the concern felt by many that big corporations and banks were using their spending power and privileged access to influence EU laws and regulations in their interests, with ordinary people losing out. The big banks avoided effective regulation despite causing the economic crisis which led to austerity and hardship for many, climate policies were downgraded, and EU trade deals, such as TTIP and CETA, consistently put profits before people.

The campaign targeted the Parliament because overall, it has generally done a better job – especially when compared to the record of the Commission or member states in the Council – of protecting social and environmental interests, and rejecting the most extreme demands of corporate lobbyists in the legislation it scrutinises.

Our pledge was aimed at MEPs in the Parliament, but transparency campaigners secured an early success when the incoming European Commission President Jean-Claude Juncker announced that transparency would be one of his priorities, and followed up with promises of a mandatory lobby transparency register, and new rules to ensure that his team of commissioners would not meet unregistered lobbyists and would publish a list of the lobbyists they met.

While these promises were not all they were cracked up to be (the so-called mandatory register was not to be legally-binding, and the new rules for commissioners excluded almost all of the other 30,000 officials in the Commission), the Commission effectively put the transparency ball firmly in the court of the European Parliament. While MEPs have often ‘talked the talk’ on lobby transparency and ethics matters, especially where other EU institutions are concerned, they have not always ‘walked the walk’ when it comes to their own rules and practices.

This fundamental problem has been thrown into sharp relief since the 2014 elections. The Commission has blundered into a number of ethics scandals, especially relating to the departure of members of the previous Barroso II Commission, some of whom have gone through the revolving door into well-paid corporate jobs, sometimes in sectors related to their previous portfolios.

By far the most high-profile of these scandals was when the former Commission President himself, José Manuel Barroso announced that he would become Chairman of and advisor to Goldman Sachs International. While not a technical breach of the ethics rules, the case showed up the paucity of the Commission’s approach, its weak rules, and its disregard for the principles of integrity and discretion, as stated in the European treaties.

MEPs were among the first to condemn the move. Various political groups wrote in strong terms to Juncker and to the European Ombudsman, and the case was raised in several Parliamentary questions and debates. When civil society and disgruntled EU staff presented their petitions, totalling 150,000 signatures, to the Commission to demand action and revamped rules, we were delighted that MEPs turned out to support us.

MEP Sven Giegold meanwhile embarked upon a valiant fight to upgrade the transparency and ethics rules across the EU institutions, including the Parliament. While only an own-initiative report (with no legal value per se), Giegold hoped it would act as a springboard to concrete ambitious reform. Giegold's considered process included consultation with civil society; transparency activists were supportive and a joint action by Democracy International, ALTER-EU, and Transparency International led to people from 24 different EU countries sending more than 73,000 emails to MEPs sitting on the constitutional affairs committee. Our priorities included: a ban on problematic second jobs for MEPs, an overhaul of the Parliament’s powerless ethics committee, and a ban on MEPs meeting with unregistered lobbyists.

However in September 2016 a vote on Giegold’s report was indefinitely postponed after months of cross-party negotiation. In a strongly-worded statement, Giegold exposed the recalcitrance of other political groups: “The conservative blockade threatens the reputation of Parliament. Liberals and the leadership of the Social Democrats feed this damage for the European Parliament by supporting the blockade.”

Focus then shifted to a formal Parliamentary report, authored by Richard Corbett MEP, to revise the Parliament’s own rules of procedure, including the Code of Conduct for MEPs. While less ambitious in scope, this process had the advantage of leading to concrete rule changes. But ALTER-EU said that the final result lacked bite. Its biggest achievements are that MEPs are now formally banned from taking second jobs which involve lobbying (although other second jobs which could provoke a conflict of interest are not affected), and a voluntary ban on MEPs meeting unregistered lobbyists. However, reform of the ethics committee, and action to tackle the revolving door did not make it to the final report.

Giegold’s report was finally voted upon in committee in March 2017, and in contradiction to the previous September, received majority support. This was not surprising: the steam had gone out of the process by then, and the disputed rules for MEPs had already been decided in the Corbett report. This vote showed that, once again, MEPs found it easier to agree on an agenda for transparency and ethics for other institutions such as the Commission, rather than their own. The plenary vote on Giegold’s report may finally take place in October 2017 although nothing is certain and the vote has already been postponed several times.

The Commission, Parliament, and Council will shortly embark upon negotiations to reform the existing EU lobby register, moving towards the Commission’s vision of a so-called mandatory register based on incentivising lobbyists to abide by the rules ie. using carrots to encourage registrations, rather than sanctions which would be possible under a legally-based register. ALTER-EU has found the Commission’s proposal to be too weak and we, alongside 100 other civil society organsiations, have been counting on MEPs to push back and negotiate a far more robust register. But so far the omens have not been encouraging.

The mandate for the Parliamentary negotiators was agreed in secret and only became public after a leak. While the mandate has several positive aspects, the Parliament has refused to commit itself to a proper ban on meeting unregistered lobbyists. A blocking majority of MEPs from the centre-right and centre-left argue that a ban on meeting unregistered lobbyists would jeopardise their ‘free mandate’ to meet with whomsoever they choose. We find this argument unconvincing and, at a time when the faith of citizens in the EU institutions is low, also deeply worrying. MEPs need to demand far greater commitments from the Commission on lobby transparency, and to secure those, they will need to deliver better transparency themselves.

The Politics for People pledge by MEPs to “stand-up for citizens and democracy against the excessive lobbying influence of banks and big business” has never been more relevant. And it will be imperative that MEPs go into the 2019 elections with a proud record on ethics and transparency. To achieve that, there is a still a long way to go.

This blog also appeared on the On Our Watch website.