Barrosogate: Time for the Commission to abolish ethics ‘self-regulation’

Barrosogate: ALTER-EU responds to Ad Hoc Ethics Committee opinion which said Barroso’s new role at Goldman Sachs International was not a breach of the rules. 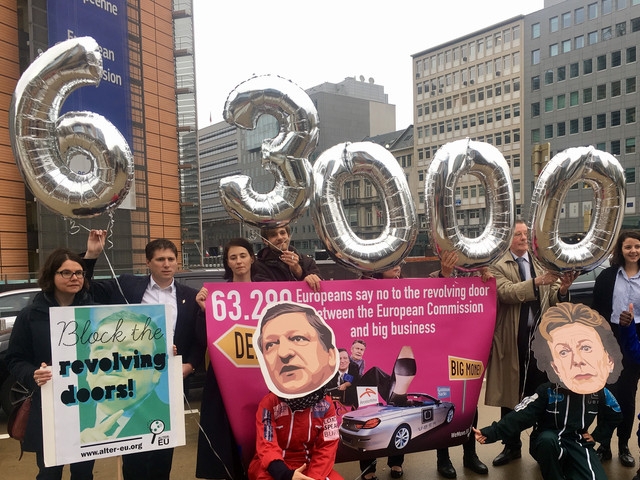 In response to the opinion from the Ad Hoc Ethical Committee on Barroso’s new jobs at Goldman Sachs International, ALTER-EU said:

“If a former President of the Commission can move, after only 20 months, to chair and advise Goldman Sachs International, and do so without breaking any ethics rules, it is clear that those rules need changing.

“Barroso’s spin through the revolving door has caused deep concern among 200,000+ citizens, heads of state, the European Ombudsman, MEPs from across the political spectrum, and most notably of all, staff from inside the EU institutions. Juncker’s Commission must now show political leadership and levy sanctions against the former president.

“Furthermore, we urgently need a change of culture, rules and practice in the Commission so that the revolving door is no longer seen as a normal part of ‘business as usual’. The Treaty requirement that former commissioners must continue to act with “integrity and discretion” after leaving office, must be properly reflected in the ethics rules and ex-commissioners must be banned from all jobs involving lobbying or risking a conflict of interest for at least three years. This would also have prevented former commissioners Neelie Kroes and Karel de Gucht going to Uber and ArcelorMittal respectively.

“Crucially, it is time for the Commission to abolish ethics ‘self-regulation’ whereby commissioners make decisions about the future careers of their ex-colleagues. The independence of the current Ad Hoc ethical Committee is questionable as its members are hand-picked by commissioners and tend to be EU-insiders. Decision-making on commissioners’ revolving door moves must be taken out of the hands of the college of commissioners, and the current committee, and given to a permanent, professional, transparent and fully independent ethics body.

“Now that the European Parliament has voted for a partial freeze on the budget for former commissioners’ transitional allowances until the Commission adopts stricter rules, the pressure is really growing on Juncker to announce a reform. It’s not too late for the Commission to learn the lessons from Barrosogate, but more than three months after the story broke, it is not at all clear that they wish to do so.”