President Juncker’s policy of proactive transparency still fails to address loopholes in lobbying transparency rules and does not ensure a balanced consultation of stakeholders, new analysis by the Alliance for Lobbying Transparency and Ethics Regulation (ALTER-EU) shows. 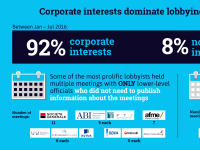 ALTER-EU’s latest research reveals that 81 per cent of lobby meetings at the European Commission’s department for financial stability and capital markets (DG FISMA) between January and July 2016 were not covered by the current provisions for proactive transparency. All of these meetings were held with lower-level officials only, which are not subject to the Commission’s disclosure regime – a big loophole that undermines the rules’ purpose to increase lobbying transparency.

The data also highlights persistent corporate dominance in lobby meetings with lower-level DG FISMA staff: 92 per cent of the encounters that took place during the period of analysis were held with corporate interest representatives.

On top of this, the ALTER-EU research finds that even unregistered lobbyists have been able to access DG FISMA. Between January and July last year, 13 per cent of all meetings at the department happened with interest representatives not listed in the EU Transparency Register. Some of these encounters happened with high-level officials, who are not only covered by the existing rules on transparency, but are also prohibited from meeting unregistered lobbyists.

“The Commission must reform and expand its lobby transparency policy. Our analysis proves that loopholes are heavily exploited by lobbyists, which undermines the rules and shows the need for greater proactive transparency of lobby meetings at all levels of the Commission.

“As it is, the current regime makes it impossible for citizens to get a full picture of who is influencing EU policy-making.

“The big imbalance in lobby meetings with EU officials provides corporate interests with privileged access to the EU institutions. Juncker’s commitment to ‘appropriate balance and representativeness’ in the Commission’s consultation of stakeholders is still not backed by meaningful action.”

ALTER-EU’s findings reflect the disregard the Commission bodies hold for the Working Methods that President Juncker introduced in 2014 to to increase stakeholder balance and improve oversight and accountability of EU officials meeting with lobbyists.

Unfortunately, this pattern of opacity is not unique to DG FISMA. Further data obtained by ALTER-EU through the same series of access to documents requests highlights very similar issues at the European Commission’s trade policy department (DG TRADE). In the context of lobbying around the EU-US TTIP deal in 2015, 83 per cent of meetings were held with EU officials not covered by the Commission’s proactive transparency rules.