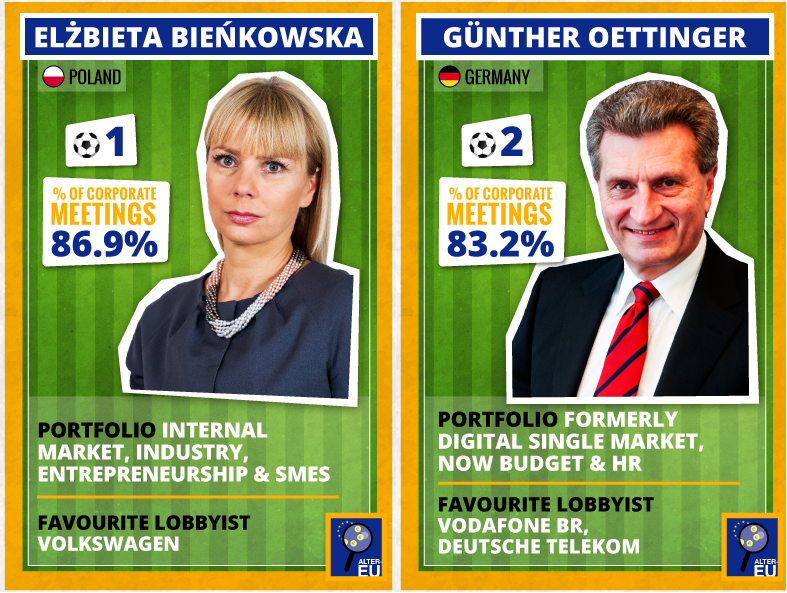 It's half-time for the Juncker Commission and ALTER-EU has analysed the progress made towards ensuring “an appropriate balance and representativeness in the stakeholders" commissioners meet. In ALTER-EU's view, at least 12 commissioners deserve a yellow card.

“… Members of the Commission should seek to ensure an appropriate balance and representativeness in the stakeholders they meet.”

This was the instruction that Jean-Claude Juncker, new president of the European Commission, gave to his 27 fellow commissioners in November 2014. It was accompanied by a demand that all commissioners (alongside their cabinet staff and the directors-general of the Commission) would proactively publish a list of the lobbyists they met, and that they would not meet those who were not in the EU lobby transparency register. Campaigners had long criticised the easy access that big business interests enjoyed to the Commission - and its resulting impact on decision-making. Juncker’s statement was cheered, as it appeared to flag an acknowledgement of the problem of corporate bias and even corporate capture, where an issue, process, or dossier is influenced in the extreme by corporate interests. We hoped it was a recognition that things needed to change.

As we approach half-time for the Juncker Commission, it is time to evaluate the progress made by individual commissioners towards the goal of ensuring “an appropriate balance and representativeness in the stakeholders they meet”. Analysis of who commissioners meet is one indicator, among several, of the extent of the corporate bias in Commission decision-making.

Unhelpfully, Juncker did not define what he meant by “an appropriate balance and representativeness”. For ALTER-EU (the Alliance for Lobbying Transparency and Ethics Regulation), it is not about a simplistic 50-50 balance in terms of corporate and public interests met: the problem of corporate capture will not be solved if the Commission meets a few less businesses and a few more NGOs. Instead, it is first and foremost about EU decision-makers, including all commissioners, remembering who they should serve, namely citizens, communities, and their (public) interests, rather than corporate interests. If that were to be the starting point of the policy-making process, we believe that a rather different picture of meetings and outreach would emerge.

From Monday through to Thursday this week, ALTER-EU will release eight football cards on social media to reveal which commissioners have breached Juncker’s instruction the most. On Friday (28th April), we will publish the final scorecard for Team Juncker, alongside further analysis, and the full data set. Using IntegrityWatch, we have calculated the percentages of encounters with corporate interest lobbyists and commissioners’ favourite (most frequently met) lobbyists. We will also highlight some commissioners with lower percentages of corporate meetings, and cases of good practice (where we could find it). This is not only to show that it is possible to keep a better balance in meetings with lobbyists, but also in the hope that they will inspire the rest of the team.

Our cards will show that for 29 commissioners analysed, there are 19 who have had more than 50 lobby meetings in total, and 12 of these for whom more than 60 per cent of their encounters have been with business interests. In ALTER-EU’s view, these players have clearly committed a foul and deserve a yellow card. Juncker, as team captain, needs to take urgent action, to make sure his players know, understand, and play by the rules. Yet, when we asked the Commission for the ‘rule book’ on how to implement “appropriate balance and representativeness” in meetings with lobbyists, it told us that none of the 25 directorates-general had one. This leads us to the conclusion that Juncker’s sole instruction aimed at preventing corporate capture is empty rhetoric with next to no substance behind it.

Alongside ongoing examples of the Commission’s bias towards the interests of business, evidenced by February’s #EUIndustryDay; the annual Commission-hosted shindig for big business leaders, organised by BusinessEurope; the Directorate‑General for Financial Stability, Financial Services and Capital Markets Union (DG FISMA) and its 92 per cent of meetings with corporate interests; and the handling of dossiers such as trade, finance, Better Regulation, Dieselgate, and a host of other topics which have consistently put business and their interests in the driving seat, this is further evidence of the Commission’s ongoing problem with corporate capture.

Our overall conclusion is clear, when it comes to the half-time score for the Juncker Commission, it is business interests 1, public interests 0. 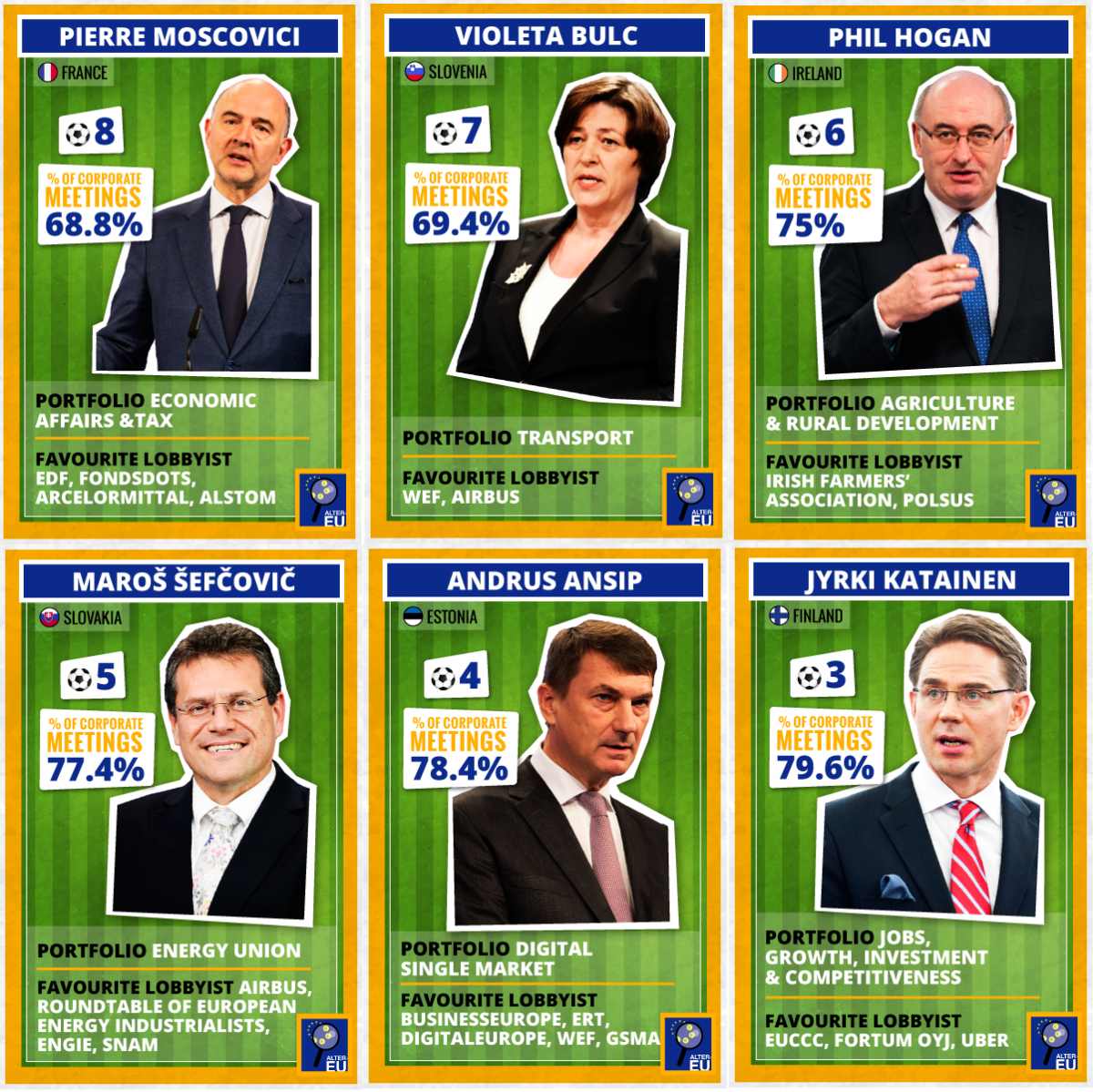 Some notes on our methodology