The revolving door in detail 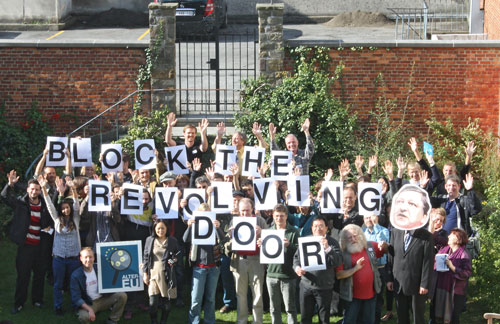 As ALTER-EU has demonstrated in a report, in 2009-10 six out of 13 departing Commissioners moved from public office into corporate or lobbying jobs, raising questions about potential conflicts of interest. Meanwhile, ALTER-EU's second report detailed more than 15 cases of EU officials moving through the revolving door.

When important EU decision-makers move into an industry or corporate lobby job, often to work on issues closely related to their former department, such revolving door moves can create the risk of conflicts of interest.

There are different revolving door rules for Commissioners, MEPs and officials.

For Commissioners, there is a Code of Conduct. This was revised in 2011 following an ALTER-EU campaign and it now includes an 18 month ban on lobbying on the same topics covered by their EU portfolio for Commissioners leaving office. The Commission has also committed to publishing information about Commissioner revolving door moves, although this has yet to be implemented. These are welcome steps but ALTER-EU considers that the Code of Conduct should be further revised to include:

For MEPs, there is also a Code of Conduct. However, this is very weak on the revolving door and only bans former MEPs from using their life-long pass to access the European Parliament for lobbying purposes.

For staff and officials across the EU institutions, there are the Staff Regulations which contain a range of rules governing the revolving door. In 2013, the European Parliament approved revised regulations which included tougher provisions on the revolving door, including a new 12 month cooling-off period for senior officials on some lobby jobs, a clearer procedure for screening new staff for conflicts of interest, and a ban on lobbying activities during sabbaticals. However, ALTER-EU considers that the Staff Regulations could be further revised as major loopholes remain:

Whilst ALTER-EU welcomes the progress made in the new rules, much more still needs to be done, not least in the implementation of the rules, to stop the privileged access and undue influence that the revolving door gives to big business and corporate lobby groups.

Following a complaint by several ALTER-EU member groups in Autumn 2012, the European Ombudsman is now investigating the European Commission over its systemic failure to properly implement its own revolving door rules. This investigation will include an examination of many revolving door cases in the last three years.

A number of Brussels-based lobby firms actively recruit from among the ranks of EU officials to bolster their firm’s prestige and claims of insider know-how, which can help their corporate clients achieve their EU policy objectives. More than half of the lobbyists at four well-known Brussels public affairs agencies have previous experience in the EU institutions. The risk of actual or apparent conflicts of interests that arise through the revolving door could be significantly reduced by changing the Code of Conduct for registrants in the EU's Transparency Register to require registrants not to hire former Commissioners or other high-level Commission officials for three years after they leave office.

All EU institutions are too secretive about the revolving door. The Commission has committed to publishing information about Commissioner revolving door moves, although this has yet to be implemented. Meanwhile, the new Staff Regulations commit the Commission to publishing annual information on the implementation of the 12 month cooling-off period for senior officials. It is not clear in what form this will take and whether officials will be identified. Meanwhile, there is no official information available about MEPs' revolving door moves. All in all, there needs to be far more transparency in this area; all revolving door moves should be published and in 'real time'. Meanwhile, the Code of Conduct for registrants in the EU's Transparency Register should include the requirement that they include on their declaration a list of any ex-EU institution member whom they have hired.