We asked the candidates for the EU’s top job how they would fight the corporate capture of our democracy. How do they score?

In Brussels, the political heart of the European Union, extreme corporate influence often distorts the political process, either blocking progress where it is sorely needed or leading to policies that are too weak or do not serve people’s needs. Their many tools for influence include big lobbying budgets, threats to leverage the economy (via layoffs, offshoring, or refusal to invest), privileged access to policy-makers and public officials, a blurred line between the private sector and public office thanks to the ever-revolving door. And the public interest loses out: this commonly happens at the expense of climate action, and the protection of social, consumer and workers’ rights.

In spite of early promises, President Jean-Claude Juncker’s Commission did not solve the EU’s problem with corporate lobbying. Instead, we faced another five years marked by scandals like Dieselgate, ex-Commission President Barroso’s swift move to Goldman Sachs and the debacle around the re-authorisation of glyphosate.

The upcoming European Parliament elections can be an opportunity for change. The Alliance for Lobby Transparency and Ethics Regulation (ALTER-EU) asked all the candidates for European Commission President what their plan to curb corporate capture would be if they got into power. We have found that the lead candidates for the Greens, the European Free Alliance (EFL) and the European Left Party (GUE-NGL) are the best qualified to put in place a plan for change, followed by the Socialist & Democrats (S&D). Disappointingly, we didn’t get a response from the Conservatives – the European People’s Party (EPP) and the European Conservatives and Reformists (ECR) and Liberals (ALDE) – which tells its own story about how important this issue is to them.

What does corporate capture have to do with the elections?

This week, millions of Europeans will vote who should represent them in the European Parliament. But that isn’t all they’ll be choosing. If the Spitzenkandidaten system holds, voters will also determine the new President of the European Commission – assuming EU member states via the Council don't intervene in the nomination process at the last minute.

Whoever ends up with the top job will have the opportunity to change course and finally put in place real rules and a change of culture that will guarantee the end of excessive corporate power and ensure citizens’ rights come before profits.

ALTER-EU asked the six main candidates running to become the next President of the European Commission about their concrete plans to fight the excessive power of corporations.

We wanted to know what candidates plan to do to ensure that citizens' interests are prioritised over corporate interests, how to end privileged access for corporations, strengthen lobby transparency, handle the particularly toxic lobbies such as the tobacco industry and deliver a better ethics system that limits conflicts of interest and revolving doors (see the full questions and context below).

Our questions were detailed, because we have heard empty promises or commitments for too long. We wanted to hear about plans that once the candidates are in office they could immediately start working towards.

We then analysed the answers we got and gave each candidate a grade from A+ to F according to the solutions offered.

So, how do Juncker's potential successors plan to help ensure citizens' interests are prioritised over corporate interests?

The standouts, presenting a clear plan with actionable measures, were the Greens and the EFA, both achieving a clear A+. 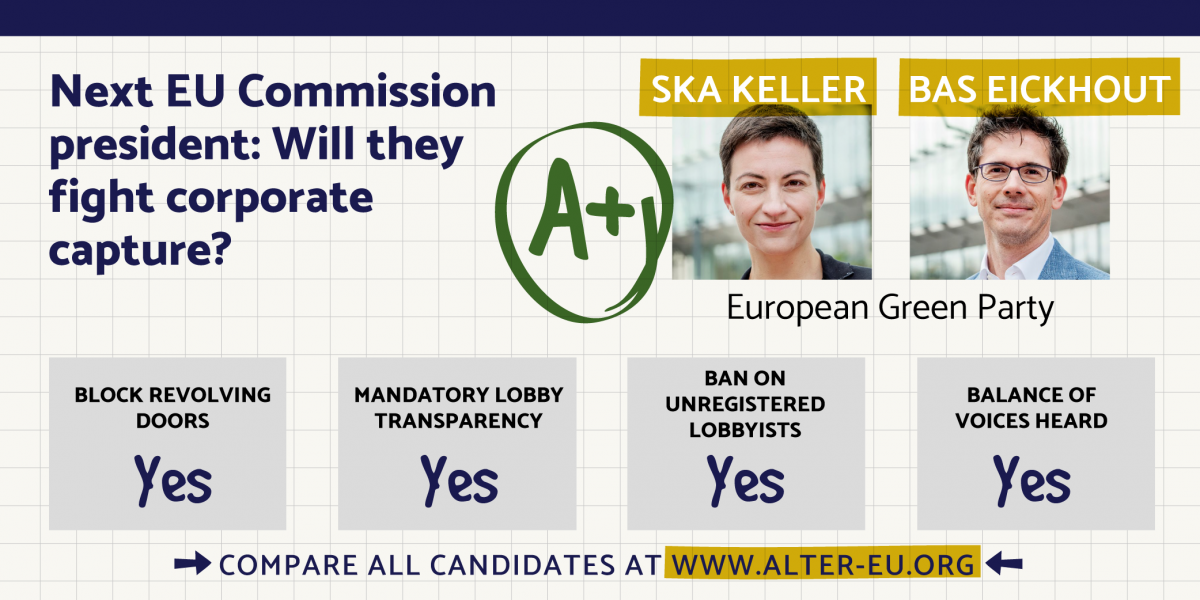 Their plan includes concrete measures including legally binding lobby transparency, reforming the channels citizens have to influence EU politics, and importantly creating an independent ethics body that covers all three institutions and can impose sanctions for non-compliance. Lead candidates Ska Keller, Bas Eickhout and Oriol Junqueras also committed to fully implementing the World Health Organisation (WHO) recommendations on how to handle tobbaco lobbyists. The Greens and EFA candidates committed to going beyond transparency to also limiting interactions to the bare minimum.

Both the Greens and the EFA also showed how they have already been leading the battle for better rules in the past years and will continue doing so, in the Commission and Parliament. Read the full answers here. 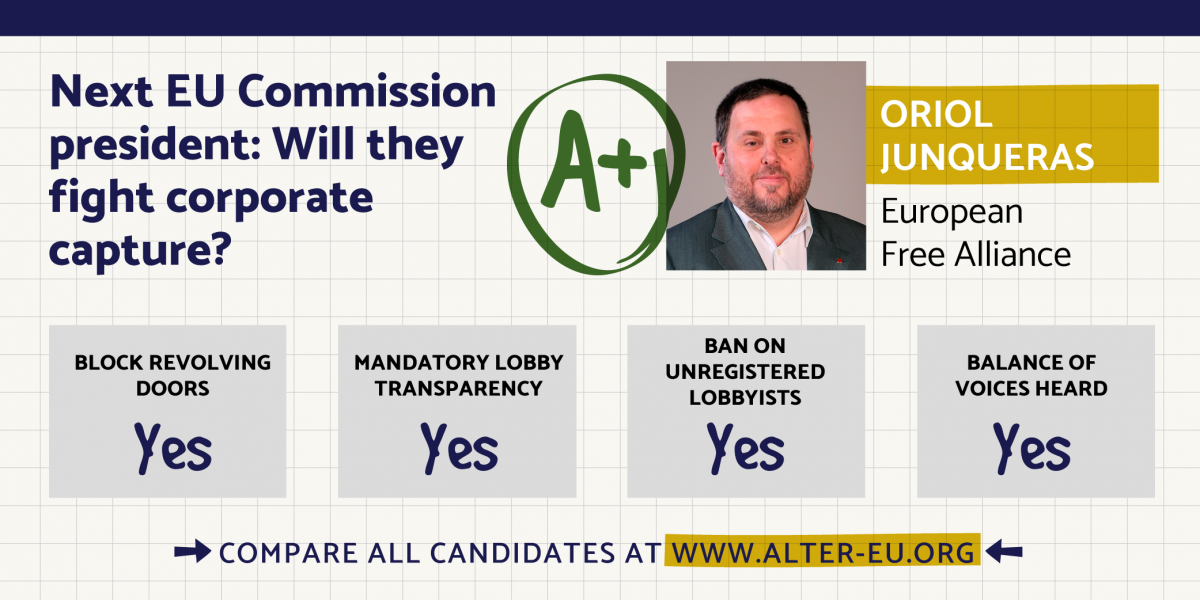 A very close second place goes to the European Left Party (GUE-NGL), with an A. Violeta Tomic and Nico Cué, its lead candidates, committed to implementing mandatory lobby transparency, extending the ban on meeting unregistered lobbyists, applying the WHO’s recommendations on tobacco lobbying and ensuring conflicts of interest are overseen by a fully independent ethics body.

A creative solution was also offered by Tomic who suggested that, to ensure there was a balance of voices heard by the Commission, the ethics body would also once a year analyse the meetings of each Commissioner and check “where imbalances are found; those Commissioners would be required to demonstrate a plan by which imbalances would be corrected”. This is a great proposal to ensure that balance becomes more than just a promise. Read the full answers here. 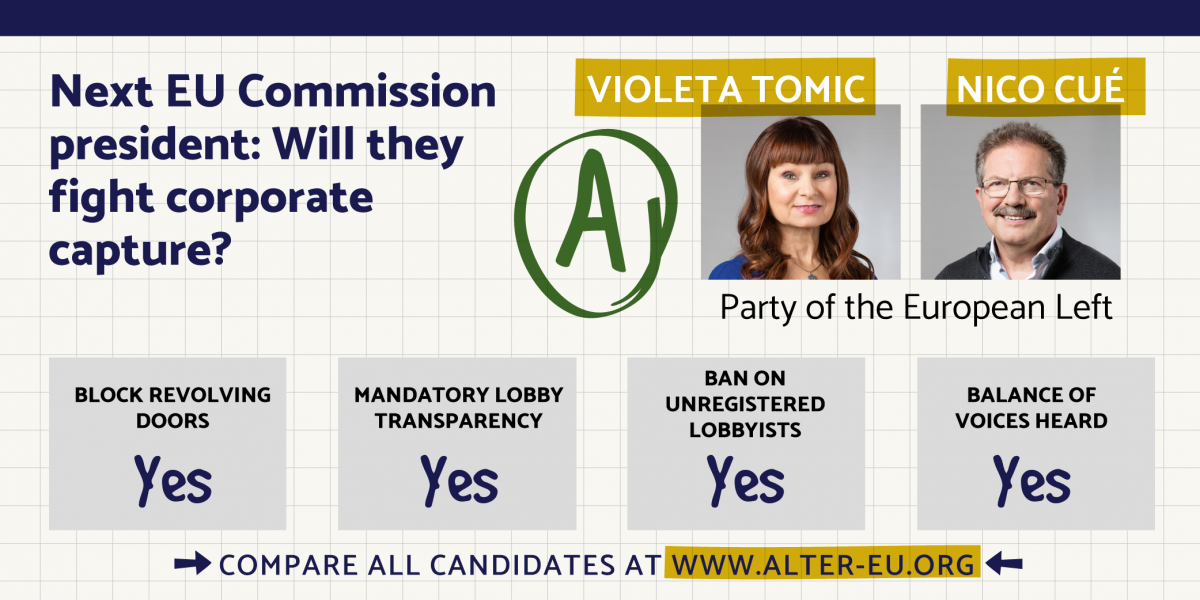 And trailing behind we have the lead candidate for the S&D, Frans Timmermans. Overall, the candidate’s answers were wider and less anchored in real, actionable rules than the others.

A positive aspect is Timmermans’ promise to increase the Commission’s involvement with trade unions, NGOs and civil society representatives. Even better, the S&D lead candidate committed to go beyond the Brussels bubble and hold “regular citizens’ dialogues, at home and around Europe, to engage with members of the public.” This is a much-needed change in EU politics which often feels (and is) incredibly distant from citizens.

The S&D also committed to delivering a de facto mandatory Transparency Register by increasing the system of incentives and expanding them to the European Parliament and Council. There is no mention of making it legally binding, only an openness to 'discuss ways to improve' sanctions.

The candidate’s answers were less impressive when it came to extending the ban on meeting unregistered lobbyists in the Commission, only opening the door to this possibility later on. When it came to the full implementation of WHO’s guidelines on tobacco lobbying and blocking the revolving door, the candidate was unwilling to admit that there was a problem with the current rules – in spite of the warnings from the European Ombudsman that this is the case.

Timmermans shows an openness to discuss the problem which is a positive step, but seems to lack the plan and ambition that other candidates have showed, which is reflected in his C- score. Read the full answers here. 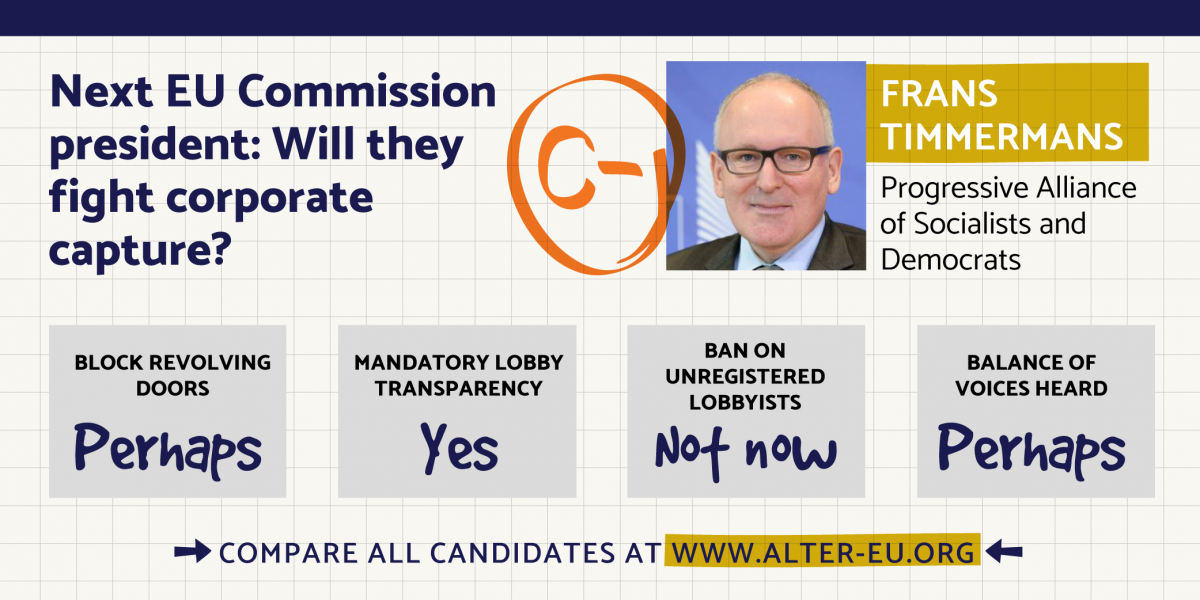 Perhaps the most notable result of this exercise were the parties that refused to engage with the problem. Despite plenty of time given to them to answer and many reminders, the candidates for the European People’s Party (EPP), the European Conservative and Reformists (ECR) and the Alliance of Liberals and Democrats for Europe (ALDE) never answered the questions. 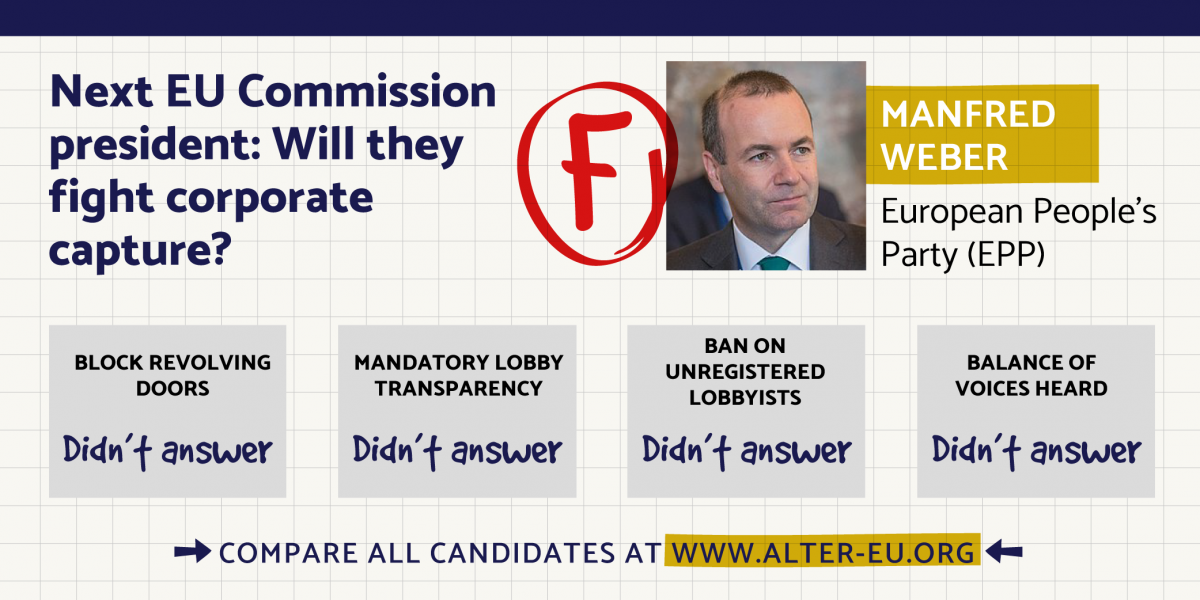 It is a shame to see lead candidates Manfred Weber, Margrethe Vestager, Jan Zahradil and Guy Verhofstadt ignoring such crucial issues for the future of EU politics. But it’s also not surprising. It matches with these parties’ record in the European Parliament – either stalling or outright rejecting advances in lobby regulation. 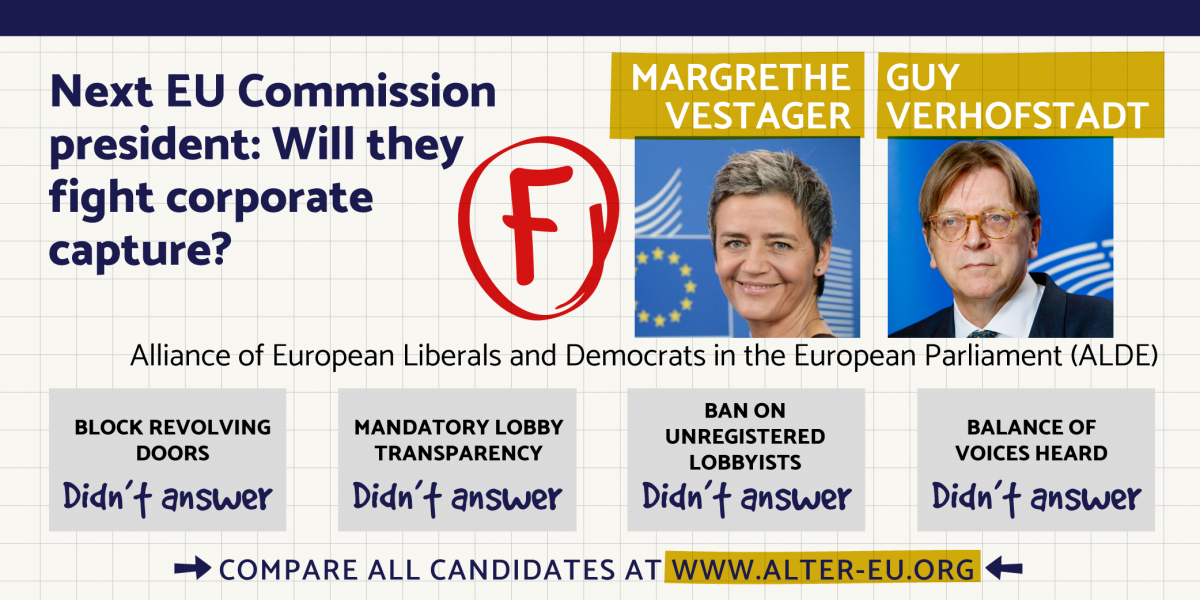 All parties that did not answer were marked F, showing their failure to engage. 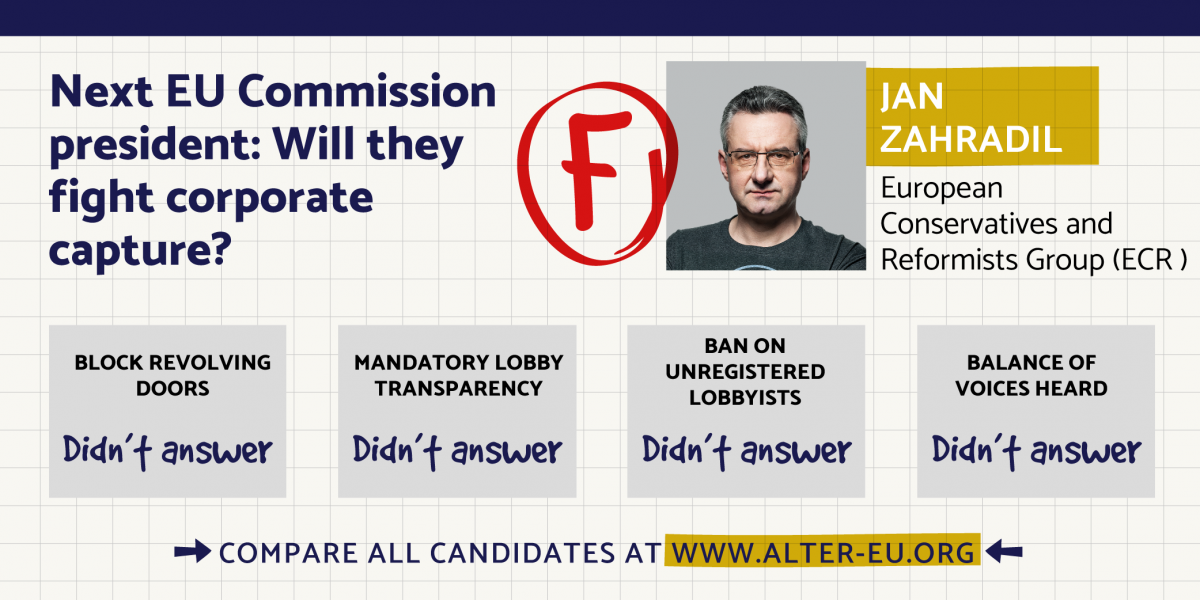 How should this affect my vote?

It is easy to look at today’s political environment and simply become discouraged that the situation doesn’t change and frustrated that there are no real choices. What our answers (and lack thereof) show is that there is a wide difference between the candidates – some of them have a plan and are ready to act.

Before going out this weekend to vote, review the candidates’ full answers (here) and make your decision. Of course, this isn’t the only important issue – make sure to check out how have parties in the European Parliament voted to tackle the climate crisis at Climate Action Network, and see which candidates have committed to limiting the power of the financial lobby at the EU level and delivering a fair financial reform at Change Finance.

These elections are the biggest opportunity for citizens to change the make-up of the institutions at EU level. Voting for candidates who have a plan on how to deal with corporate capture or at the very least who commit themselves to transparency and to engage with citizens would make a difference.

But of course, we can’t stop there – we need to continue engaging with EU politics beyond the elections through activism, protesting, political work, unionising, social media, holding public discussions, and self-organising – and the multiple other ways citizens have to demand better politics.

If yes, how will you enforce it? If no, why not?

[Research by ALTER-EU has shown that corporate interests have significantly more access to policy-makers than other any other voices. Certain Commissioners almost exclusively meet business representatives. President Juncker’s 2014 intervention instructing commissioners to “seek to ensure an appropriate balance and representativeness in the stakeholders they meet” was therefore an improvement, but has never been enforced thus far.

ALTER-EU then individually graded the answers the following way:

0 - does not agree with the problem or offer a solution

0.5 - agrees with the problem but offers no binding solution (perhaps shows a wish to do something but not a concrete mechanism)

1 - suggests a rule that addresses the problem

An extra 0.25 was awarded per each additional solutions.

We did not the grade section on “other comments” or past work. At the end, we added up all the scores and came to the final final scores:
Greens – 6.75 - A+

Candidates that did not answer were graded as absentees and hence awarded an F.